Thankfully, there is light on the tourism horizon in Ireland! Like the rest of the world, life on the island and its tourist industry have struggled with Covid restrictions. But vaccines, masks, and common sense have introduced hope into what might otherwise have been a dreary economic picture.

Recently, Achill Tourism in Co. Mayo posted this: “Following the government’s announcement … we now have a date to work toward for the reopening of tourism businesses. We are counting down to June 2 when hotels, guesthouses, self-catering accommodation, and B&Bs can open, closely followed by pubs and restaurants for outdoor drinks and dining on the 7th of June.”

So Ireland is alive and well – or, at least it will be next month. Yes, there is Covid there, but the medical community has worked very hard to contain it, secure vaccine for residents, and quarantine visitors (if quarantine is deemed necessary, any restrictions would depend on what country tourists came from before they arrived in Ireland).

We looked back at a column from ten years ago and this was how it began: “What a crazy month for travelers! If you had told someone prior to April that you couldn’t visit due to a volcanic ash cloud, they’d think you were joking.” And that’s exactly what I thought at the time when a longtime friend called from England to cancel her April trip to Mayo. Of course, as our readers know, my friend was not joking and the eruption of a volcano in Iceland resulted in the closing of airports all over Ireland, the British Isles, and Europe.

Thousands of flights were cancelled in 2011 and airlines said at the time that they had lost more than a billion euro. There were other economic losses, too, such as fragile blooms that perished because of delays in airfreight shipments from Kenya. At that time – and maybe now - Kenya's exporters supplied about a third of the flower imports into the European Union.

For Irish rental car companies – like Dooley Car Rentals (now Enterprise) – it was a nightmare, CEO Pat Dooley said in 2011. “We are refunding in full clients who cannot make it here and amending those that can get new travel dates, all without fees. It is a nightmare with extra staff dealing with the administration. Those visiting here from the USA are having to extend their stay. So we have many trying to get into the country and as many trying to get out.”

The Irish Times reported in 2011 that the chief executive of the Irish Tourist Industry Confederation had said: “It’s really, really unfathomable, but nature is nature. There’s not a thing you can do about it, to be honest, other than feeling desperately sorry for everyone. We’ve really had blow after blow in the tourism industry and this is making things go from bad to worse.”

Between April 15 and 18, 2011, nearly 2,000 flights in and out of Dublin, Cork, and Shannon were cancelled, upsetting travel plans of some 230,000 passengers. That number increased with each passing day.

The Times also reported that the International Air Transport Association (IATA) had given a “conservative” estimate that the volcanic eruption cost the airline industry more than $200 million (150-million euro) per day in lost revenues.

Some were pretty inventive about getting where they needed to go, though, like English actor John Cleese, who paid $4,950 for a taxi to take him from Norway to Belgium so he could catch the Eurostar train home to London. And there was Michael Parsons, who wrote in The Irish Times that he was one of 53 marooned in Rome who paid 150 euro each for a seat on a bus to Le Havre in France, where they planned to catch a ferry to Portsmouth and, ultimately, to Dublin Port.

But better weather kicked in, the skies reopened, and air travel returned to normal after a while. 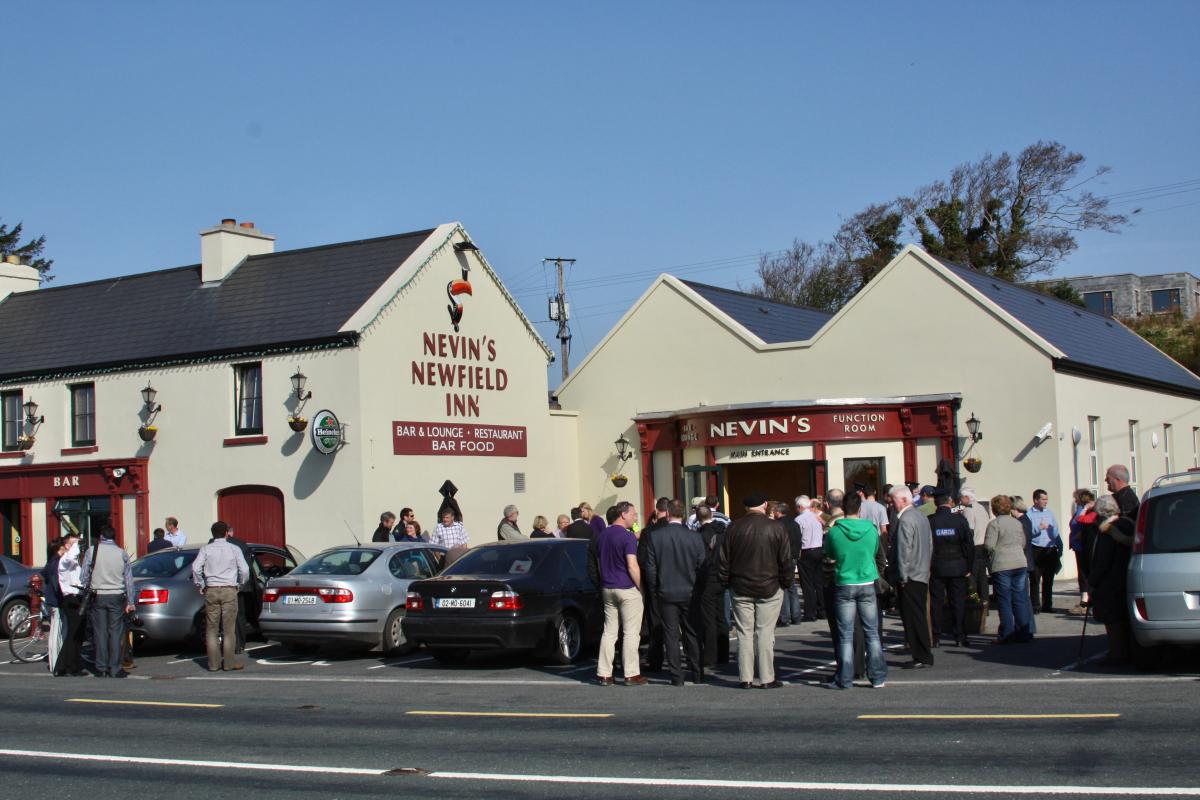 But not all of Ireland was in dire straits back in 2011 and, in fact, there were a great many happy folks in the West who attended the official opening on April 16 of the 18 kilometer, traffic-free Great Western Greenway.  At that time, the Greenway ran from Newport to Mulranny in Co. Mayo; it has since been extended to Achill Island.

When the Greenway opened, throngs of happy cyclists and onlookers gathered at Nevin’s Newfield Inn in Roskeen. Many jumped on their bikes and rode the route from John and Hannah Moran’s farm into Mulranny, where the official ceremony took place behind the Park Hotel.

The Greenway primarily follows the bed of the old Newport/Mulranny railway that was once part of the famed Westport/Achill Railway that operated for 42 years but closed in 1937. The route, which offers gentle gradients and is part of the National Cycle Network, is the longest off-road walking and cycling path in the country. 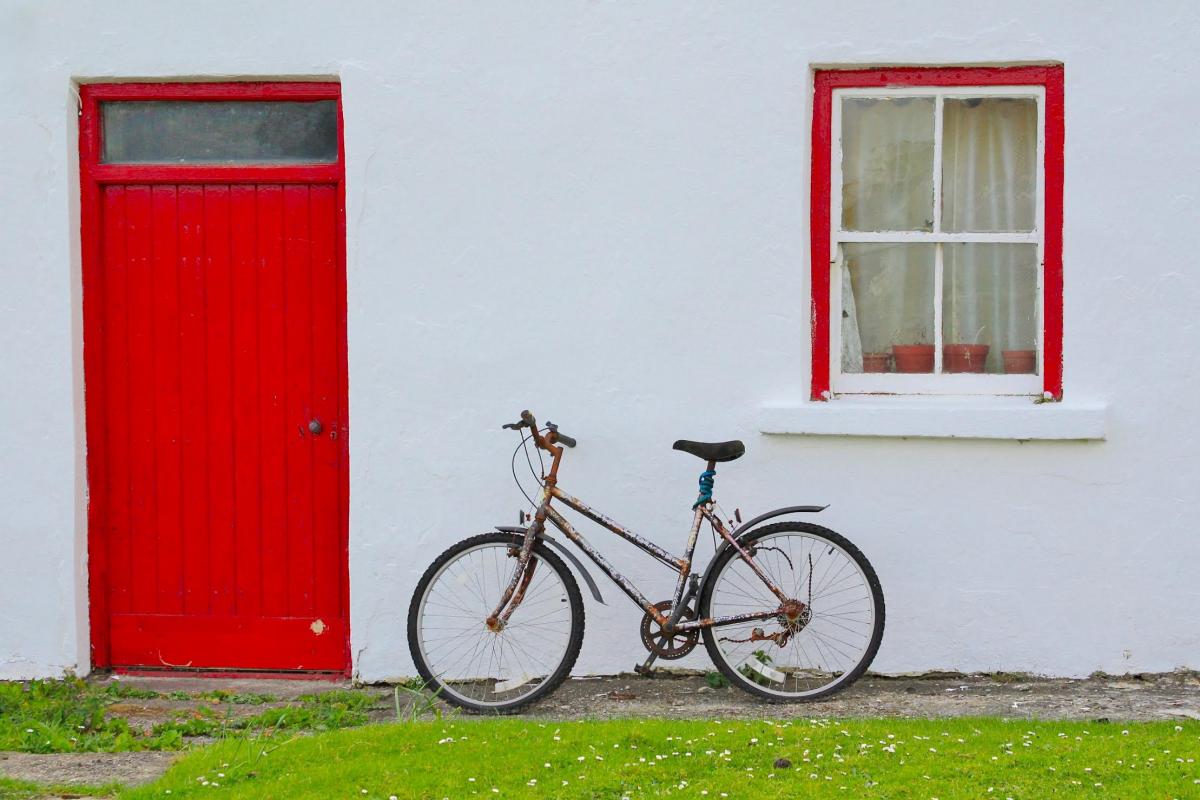 In many remote parts of Ireland, bicycles were one of the only modes of transportation for many years. (Judy Enright photo)

We’ve written before about how daunting it is to come from our American roads and have to switch your mental gears to stay alert and drive on the other side on Ireland’s roads.

But it’s not just staying on the other side that makes driving in Ireland a challenge. Many Irish drivers – especially the young – cling to your bumper (especially if you’re not going 100), pass on curves, and drive at speeds that are simply mind-boggling, given the width and condition of some of the roads. So being able to enjoy the scenery at your own pace on a walking/cycling path is a dream come true for the local residents, their guests, and tourists to the area.

A side note: There were more than 70 Mayo landowners who granted passage over their land for the Greenway.

There is now a greenway in Westport, too. The  Westport Town Greenway (Slí na Sláinte) is a 2.5-kilomtere route that links Westport’s historic town center with the Quay.

The main commercial center of Westport includes the Octagon, the Clock, the Carrowbeg River, and many excellent shops, pubs, and restaurants.

The Quay, which was once a thriving commercial port, has recently undergone rejuvenation as a major tourism base.

Historically, the two centers were linked by the railway line, which allowed goods to be transported from the Quay to the town’s railway station and beyond. The disused railway line, now known as the Westport Greenway, offers users traffic-free walking and cycling and a gentle gradient not greater than 1.6 percent as well as an impressive view of Croagh Patrick and Clew Bay. The route can be used in both directions and can be accessed from the Quay or from the old cattle pass located at Altamont Street near the town center.

If you’re in Co. Clare this month, be sure to visit a local tourist office to find out if there are programs offered under the banner of the Burren in Bloom. The month of May traditionally sees the otherwise barren, rocky Burren bursting with blooms. The program centers around the town of Ballyvaughan, the “capital of the Burren,” and celebrates the arrival of summer. There are usually all kinds of activities planned for all ages, although these might have been curtailed by Covid. For more information, see ballyvaughanireland.com.

Be sure to visit aerlingus.com and other transatlantic airlines and book your trip to the Emerald Isle. It’s a great place to be at any time of year.