The Chieftains are highly recognized for reinventing traditional Irish music on a contemporary and International scale. The Chieftains were formed in Ireland in 1962 by Paddy Moloney, the top traditional folk musician in Ireland and around the world. Their ability to transcend musical boundaries and blend tradition with modern music has notably hailed them as one of the most renowned and revered musical groups to this day. After more than fifty seven years of making some of the most beautiful music in the world, The Chieftains' music remains as fresh and relevant as when they first began. And now they will bring their music once again on tour to the US in 2020 called, ‘The Irish Goodbye.’

What is an Irish Goodbye you may ask? Dictionary.com states that an Irish Goodbye is sneaking out of a party without telling anyone. But some people disagree. They say that an Irish person can’t be the last one to leave the party without hours of long conversations, a few sing alongs and elaborate keening farewells. So you may have to guess which definition fits this tour. Are they leaving us or are the staying around for a few more songs?

Paddy Moloney says, “It’ll be fantastic to return once again to America where we are always welcomed with open arms. We’ll share a lively evening of music, stories, laughter and great craic! In each city we will perform with local Pipe and Drum bands, Irish Dance schools, choirs and special guests – the whole shebang! It’s always fun to showcase local talent to their hometown crowds.” 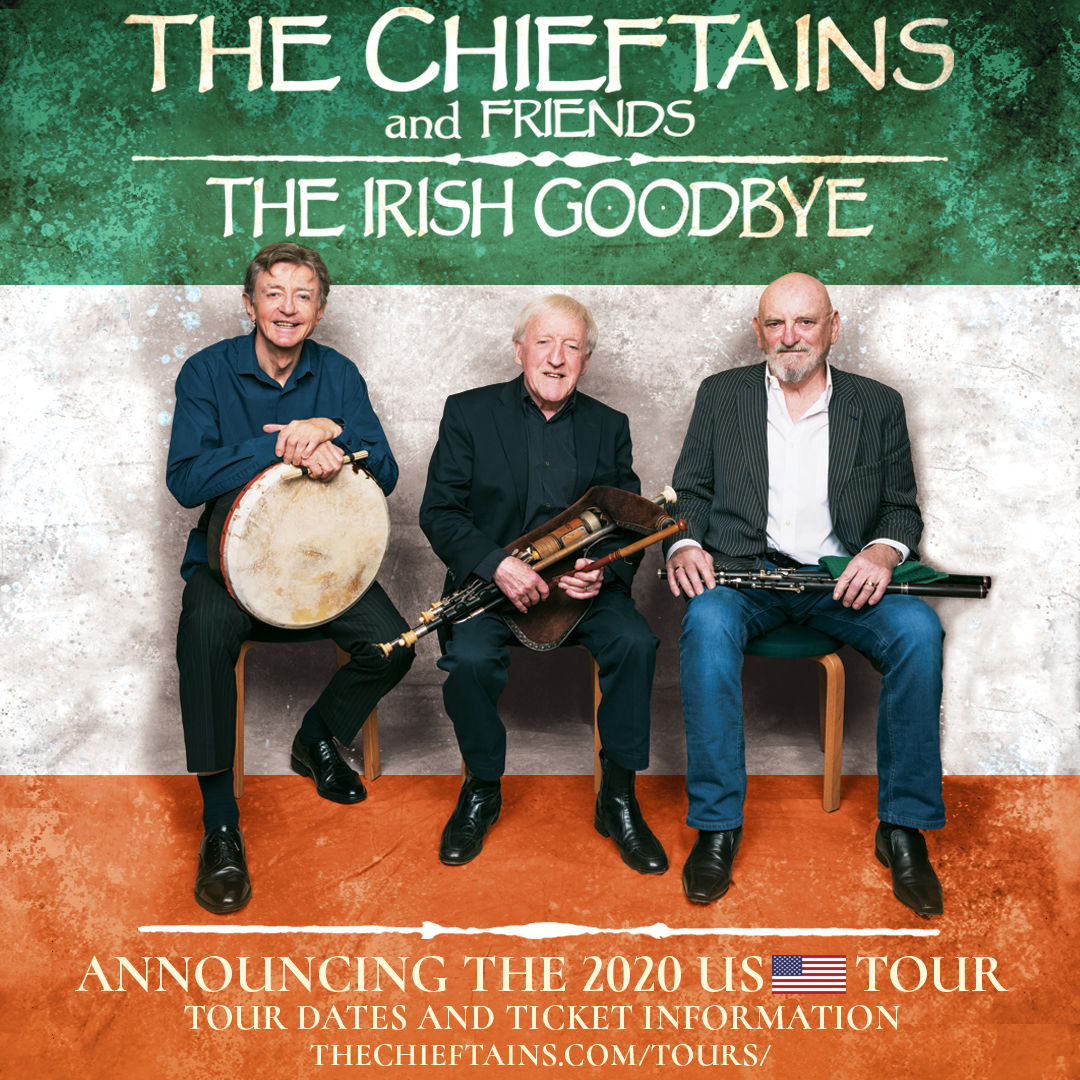 As cultural ambassadors, their performances have been linked with seminal historic events, such as being the first Western musicians to perform on the Great Wall of China, participating in Roger Water’s “The Wall” performance in Berlin in 1990 and being the first ensemble to perform a concert in the Capitol Building in Washington DC. In 2010, their experimental collaborations extended to out of this world, when Paddy Moloney’s whistle and Matt Molloy’s flute travelled with NASA astronaut, Cady Coleman, to the international space station. Although their early following was purely a folk audience, the range and variation of their music and accompanying musicians quickly captured a much broader audience, elevating their status to the likeness of fellow Irish band, U2. Never afraid to shock purists and push genre boundaries The Chieftains' however remain loyal to their roots.  They are as comfortable playing spontaneous Irish sessions as they are headlining a concert at Carnegie Hall.  Approaching sixty years of making some of the most beautiful music in the world, The Chieftains remain as fresh and relevant as when they first began.

Paddy finishes with, “Our US fans continue to give us the warmest of welcomes, so it’s going to be a huge pleasure to play once again for all our friends.”

So are they staying or are they going? THE CHIEFTAINS, ‘The Irish Goodbye Tour’ at Boston Symphony Hall on March 13th

Don’t miss this show. For tickets go to www.thechieftains.com