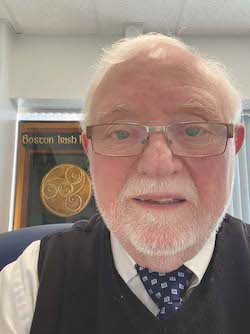 You have in your hands (or rather, on your screen) the inaugural edition of a new publication that’s all about the community bearing that name.

I am not sure what term fits best to describe this new venture. It’s designed to be a magazine, but it’s larger than the print magazines we’re used to seeing at local news stands and bookstores. It’s more compact than a broadsheet like a daily newspaper, or the tabloid like the Boston Irish Reporter, the monthly newspaper that is its progenitor, and which succumbed to the times we live in last December after three decades of publication.

Perhaps it’s best described as a periodical with a circulation schedule of every three months or so.

Since first announcing the new publication early this year, I have been encouraged by the expressions of support we’ve received from all sections of the community. For 30 years, the mission of the Irish Reporter was to tell the stories of the Irish communities in Greater Boston. A recent message from local non-profit Irish group said, “We are pleased to learn that there is still a print media that allows us to get the word out.”

For the most part, printed newspapers and periodicals are a vanishing breed, as the ink-on-paper media industry has decamped to the digital world, with an  accompanying loss of revenue and, sadly, large numbers of journalism jobs. The demise of our monthly newspaper is emblematic of those trends.

As the new year began, the companion website BostonIrish.com was expanded and improved, with additional news and features from our town as well as from our collective ancestral homeland. The immediacy of this digital presence enables Boston’s Irish to connect with current news on a daily basis.

Maybe it’s the obstinate Irish kid in me, but I still relish the tactile feel of holding my newspapers, books, magazines, and periodicals in my hand while reading them.

As we move forward with this new venture, I invite you to read through this inaugural edition of Boston Irish and let me know what you think. You can reach me at 150 Mt Vernon Street, Dorchester MA 02125. Or email me at newsroom@BostonIrish.com.  You can stay in more frequent touch and also sign up for a digital news alerts on breaking news and features by visiting BostonIrish.com.

Ed Forry, formerly the Publisher of the Boston Irish Reporter, continues in that role with BostonIrish.com and this new Boston Irish periodical.