“It’s not as important where we stand, as in what direction we are moving.”

DUBLIN – Ireland’s population was 2.8 million (4.3 with the North) in 1960 and is projected to pass 8 million (10 with the North) by 2050.  All political parties accept that to continue to build an expanding Ireland, where people flourish, will require sustained public investment in housing, schools, hospitals, transportation infrastructure, clean energy, essentially everything, everywhere. No matter which party or coalition governs Ireland, that direction of travel is set.

Reagan’s and Thatcher’s governments set the direction of travel for the US and the UK during the ‘80s, relentlessly arguing that reducing the size of government, cutting taxes, and eliminating red tape and regulation would unleash innovation and free enterprise, and improve lives. These notions are still stubbornly popular in the two great Anglo-Saxon democracies because some people became wealthy in their mature economies, but the idea of reducing the size of Ireland’s government has zero traction here, where there are no Irish Grover Norquists forever dreaming of drowning governments in bathtubs.

Here, there is a sense that while not everything is perfect, the country is on the right track, a feeling that is psychologically valuable to individuals, organizations, and societies. The government cannot do it all. Businesses will provide most of the livelihoods and taxes, but the government will continue to set the course.  Companies think in shorter time increments – quarterly revenue targets, stock prices, and making payroll.  As the instrument of the people, government is charged with fostering and harnessing the dynamism of free enterprise while making life as fair and safe as possible for the people.  Massachusetts can look to Dublin for examples of how to improve morale by making progress in housing, transportation, and women’s rights.

Housing for Ukrainians as a gift back later on?

To date, some 63,000 Ukrainians have arrived in Ireland since Russia’s invasion. Ireland’s motivation in accepting these refugees is principally humanitarian, but it must be said that as a member of the EU, Ireland is also legally obligated to receive a number of refugees proportional to its population. That adds urgency to the building of accommodations, an urgency that might ultimately be the refugees’ gift back to Ireland.

The Irish have opened their hearts, homes, schools, and hospitals to the refugees, receiving commendation from Ukraine President Zelensky for their generosity. But the sheer number of refugees has exacerbated the housing shortage, which was already at crisis level. The government is building more social housing and ‘rapid- build’ modular homes, streamlining approval processes for new construction, and offering 50k euro grants to refurbish vacant homes. These ambitious housing initiatives are long overdue and have been hampered by global supply chain problems, but they are starting to work.

There are signs that the war could be moving to a favorable conclusion. Ukraine’s retaking of Kherson and the Democrats’ strong performance in the US midterms will not encourage Putin to continue his war. The Republican establishment’s blaming of Trump for the poor showing of his loyalists will dim Putin’s hopes of having his friend return to power, and with a tiny majority in the House, Republican threats to reduce Joe Biden’s aid to Ukraine are effectively off the table.  If and when the war ends, the vast majority of Ukrainians may well return to their homeland and the accommodations built to serve them could be repurposed for other needy communities and new arrivals to Ireland. The increased supply should also bring the cost of housing down.

A commitment to excellence with public transportation

Dublin‘s public transportation system is not as sophisticated or comprehensive as those of  other leading cities, but the Irish government is committed to creating a world-class operation. For example:

• The Dublin light rail ‘Luas’ (Irish for speed) system was launched in 2004 and has two lines of sleek trams that intersect at O’Connell Street.

• An extensive network of double-decker buses is constantly adding stops and new employees.  An ongoing recruitment campaign for bus drivers uses the tagline “Get thanked for a living’ because polite Dubliners (almost) always thank their drivers for delivering them safely.

• Fares across the system have been cut to encourage ridership and to reduce car traffic, and, like several European countries that have already implemented free public transport in some cities as part of their climate strategies, Ireland may do the same.

• More expansion plans for public transport in Dublin have been approved this year, including a $15 billion plan for a ‘proper’ underground subway line that will link the northern suburbs, the airport, the city center and the southern suburbs.

Compare this growing system to Boston’s venerable first-in-the-nation subway in the US, and the first electrified subway in the entire world. Historically innovative, the T is still objectively more complete than Dublin’s: more lines, stops, riders, underground subway lines, commuter rail, ferries, and linkages to Amtrak. That said, as a one-time daily user of the T, I became accustomed to frequent service failures and visitors referring to the system as “rickety.” Observing the T from a distance for the last few years, I think it is obvious that the situation has deteriorated:

• Delays, collisions, derailments, fires on trolleys, buses, and trains have become so common as not to be newsworthy.

• A fire at Park Street, a black-out in Maverick Square, a fatal stairway collapse near JFK, a Red Line door at Broadway dragging a man to his death, a wrong way escalator at Copley maiming patrons. Orange Line riders forced to jump from a burning train and plunge 50 feet into the Mystic River.

• Adding insult to injury, fares have been hiked and services cut.

Outgoing Gov. Charlie Baker had 8 years to improve the T.  He spent that time deploying his venture capital pals to slash MBTA spending, arguing it should be “run like a business” (hopefully not like Twitter). Baker’s hatchet men blamed allegedly lazy unionized workers and absenteeism for the problems. This weird trip back to the Reagan years of blaming problems on government waste and organized labor has only served to destroy morale. But starving the T is consistent with right wing orthodoxy:  Reagan cut food stamps, Clinton cut welfare, Trump defunded the USPS, Rick Scott wants to cut Social Security.

The core problem with the T is not wages or pensions, it is this austerity mindset.  The T is not a business, it is a public service that should improve the city and the lives of its people. T workers should be honored as the essential workers that they are. Of course, the T should be run efficiently and cost effectively, but first and foremost, the people deserve a T that is reliable, affordable, safe, and, most importantly, improving.

Boston should look to Dublin’s affirmative approach. Dublin’s system is not nearly as large as Boston’s, but it is growing, and the Irish people are delighted and proud to have a functioning system. That feeling of optimism and the smiling drivers saying “God bless” to their thankful customers are daily reminders of the importance of morale in organizations and societies. 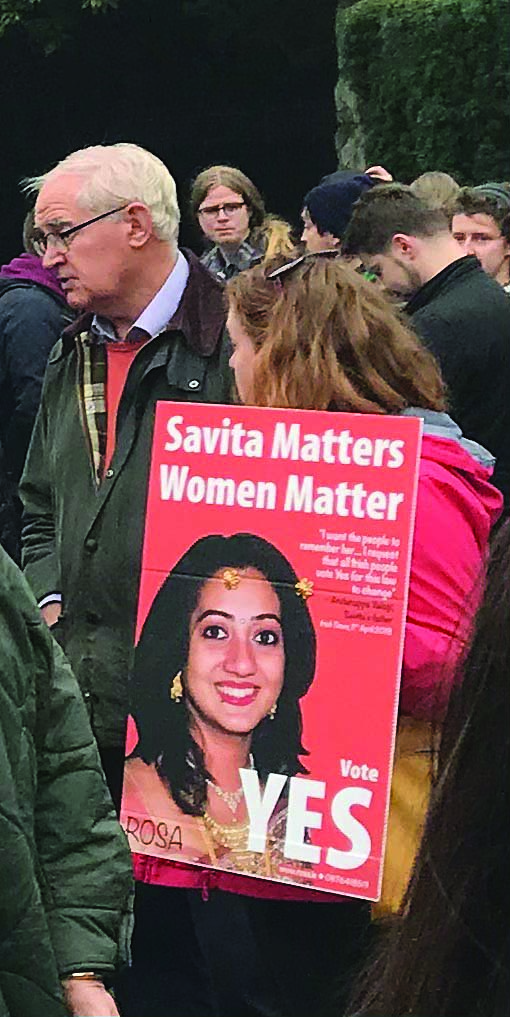 e secured in the US in 1972, marriage equality in Massachusetts in 2004. In Ireland, the abortion rights and marriage equality referenda passed only recently, in 2018 and 2015, respectively.  Even divorce only became legal in 1996.  Commenting on these societal changes, the comic Tommy Tiernan remarked that “it was not that long ago that being left-handed was illegal.”

The direction of change in Ireland is to expand rights and move forward, not to move backward and take away rights.  We attended a Dublin march in October marking the death of Savita Halappanavar, a 31-year-old Indian-born dentist who was excited to be 17 weeks pregnant with her first child in 2012.  Experiencing back pain, Savita went to a hospital, where doctors concluded that she had a 100 percent chance of miscarriage. She repeatedly requested an abortion to save her life, but because there was still a detectable fetal heartbeat, she was allowed to die of sepsis. Her death galvanized the referendum movement to repeal the 8th amendment,which banned abortion. Abortion rights were signed into law in December 2018.

Accessing the limited legal abortion services is still challenging in Ireland, especially in rural communities. Many women are still forced to travel to Britain.  Even so, Ireland is moving in the direction of more rights, not fewer. By comparison, women living in blue state Massachusetts have more reproductive health services available to them than their Irish counterparts have, but the overturning of Roe v. Wade by the US Supreme Court has taken rights away from women. The Democrats’ midterm election results are a positive sign that American women, especially young women, and their allies are prepared to fight (and vote) to win back the rights that have been stolen.

“Quand je me regarde je m’inquiète, quand je me compare, je me rassure (When I study myself, I worry, but when I compare myself I am reassured).

This maxim applies to countries as well as to individuals.  Compared to Britain’s parade of five prime ministers in the six years since Brexit, the Irish government looks competent, stable, and visionary.  The British Central Bank forecast calls for the deepest and longest recession in 100 years. Tax shortfalls, railway and health service strikes, labor shortages in some areas and high unemployment in others, are signs of the downward spiral caused by the combined impacts of Brexit. The Tories’ latest PM, the billionaire Rishi Sunak, has announced “tough decisions” (aka austerity) to fill the hole in their budget.  Slashing public services, including the treasured NHS (National Health Service) will accelerate England’s decline and amplify discontent. The UK has the worst performing economy in the G20 except for that of heavily sanctioned Russia. A recent Yougov poll revealed that less than 30 percent of the British public now believe that Brexit was a good idea, and nearly 60 percent think it was a mistake. Britons may soon be jumping out of metaphorical Orange Line trains into the Mystic.

What is different and slightly hopeful in late 2022 is that the BBC and other British news outlets have finally started to name Brexit as a possible root cause of the UK’s distress. Until now, ‘the B word’ was verboten.

While the UK has blown a gaping hole in its budget, Ireland’s Office of the Exchequer found another 2 billion euros of unanticipated tax receipts from multinationals hidden under a cabbage leaf in November’s budget garden. The news was greeted by the customary frowning ministers with a warning that the windfalls cannot be counted on to reoccur and attention to the hundreds of layoffs from Twitter, Stripe, and Facebook and the brutal and likely illegal manner (by email) of the layoffs. Some worry that downsizing is the beginning of a larger tech swoon. Others wonder if the golden tax eggs laid by the multinationals are not just lucky breaks – not, like a sunny day in Ireland, to be trusted – but signs that Ireland’s status as the only native English-speaking country in Europe with a well-educated, highly skilled, youthful, and growing population might mean that the island’s flourishing has really just begun.

As 2022 ends, Ireland is on the right path, always mindful that policy decisions taken today will determine Ireland’s trajectory for the next 100 years of nationhood. For the USA, the challenges are both material and philosophical. After the wrong turn of MAGA, the US turned to Joe Biden to steady the ship with policies that have been proven to work in the past. The Rescue Bill and the CHIPS and the Inflation Reduction Acts make his economic legislative achievements the most impressive since FDR, and the midterm results indicate that this change in direction might endure.

A step backwards, after you have taken a wrong turn, is a step in the right direction.