Respected Boston actress, singer, and musician Erica Spyres is a cast member of “Paradise Square,” one of the most ambitious new musicals on Broadway this season. Locally, she has been a long-time favorite, appearing in everything from “Light in the Piazza” at SpeakEasy Stage to “Camelot” at New Rep and “Avenue Q” at Lyric Stage, work for which she has been honored with an Elliot Norton Award and three IRNE Awards.

Spyres was part of the national tour of “Once” that played Boston, subsequently making her Broadway debut in “Carousel” in 2018.  She and her husband, Drew, who are originally from the Midwest, relocated to New York’s Washington Heights six years ago, but they both still consider Boston to be their home.

Erica has been an integral part of “Paradise Square” since its inception.  The show was created and developed at Berkeley Repertory Theatre in California in 2019 before playing a pre-Broadway try-out in Chicago on its way to New York.

The show, which earned 10 Tony Award nominations (including Best Musical), is set in 1863.  The Civil War is raging on, but in New York City, free Black Americans and Irish immigrants live and love together in the unlikeliest of neighborhoods – the dangerous streets and crumbling tenement houses of Lower Manhattan’s Five Points slum.

Paradise Square is the name of the local saloon where the locals enjoy camaraderie and rousing nights of music and dance. The characters include the indomitable Black woman who owns the saloon; her Irish-Catholic sister-in-law and her Black minister husband; a conflicted newly arrived Irish immigrant; a fearless freedom seeker; an anti-abolitionist political boss; and a penniless songwriter trying to capture it all. 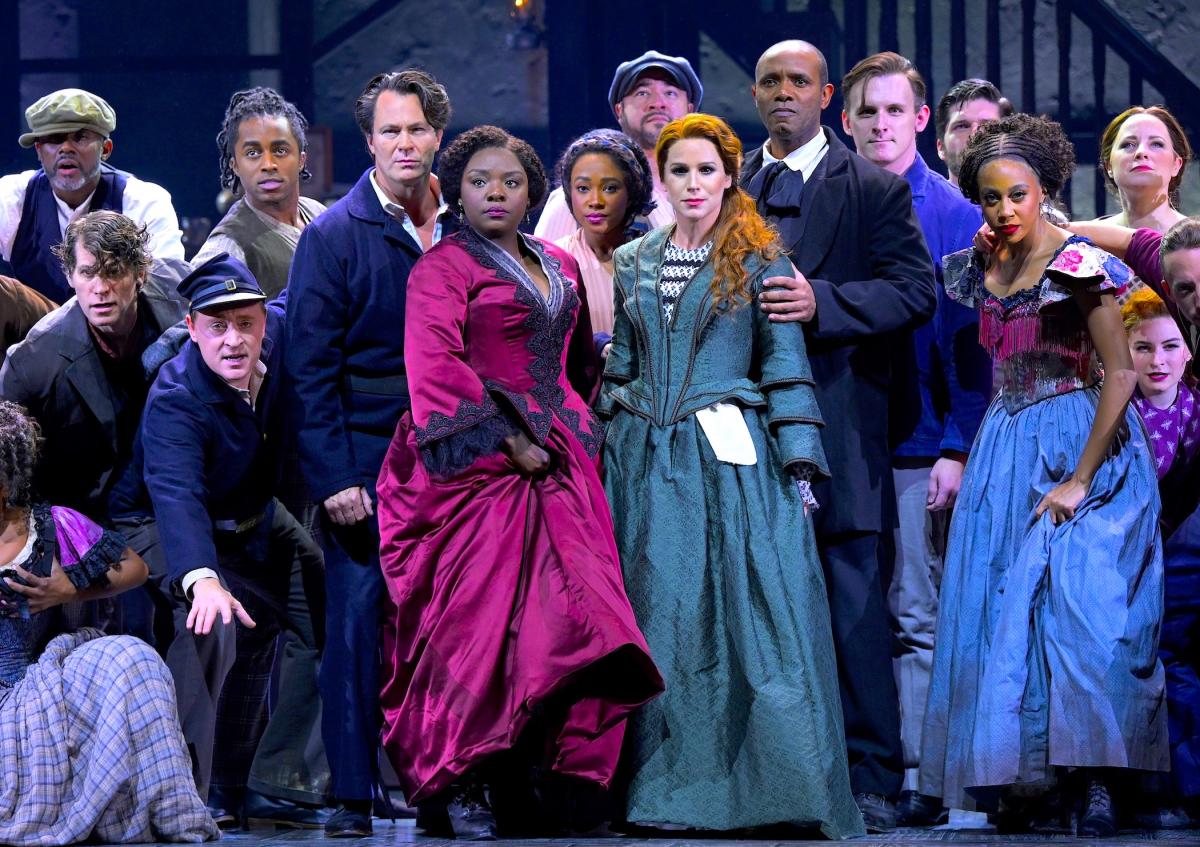 Erica Spyres (back row, far right) and the cast of the new Broadway musical “Paradise Square” Photo by Kevin Berne

The equilibrium comes to a brutal halt when President Lincoln’s need to institute the first federal draft to support the Union Army incites the deadly NYC draft riots of July 1863.  The Irish were drafted, while the Blacks were excluded – not being recognized as citizens – and the rich, uptown crowd bought their way out of serving.

With racial harmony demolished by a country at war with itself, this becomes a story of class conflict, racial injustice, the plight of immigrants, and the struggle for equality.

“Paradise Square” also details the creation of a new dance form.  As the Christian Science Monitor commented,  “The choreography of Bill T. Jones involves a fusion of cultural inspirations – from the rituals that enslaved Africans brought to America to Irish step dancing . . . We see the two groups gradually borrow from each other: the Irish performers bend and thrust their bodies in freer movements; the Black dancers find ways to vary their footwork from stomping to quicker, lighter stepping – a vibrant integration of different rhythms and a melding of one tradition into another that ultimately would lead to the new American form called tap.”

Erica plays multiple characters throughout the evening, including the role of Amelia Tiggens, wife of a corrupt, anti-abolitionist political boss, in Act Two.  (Additionally, she understudies the role of Annie Lewis.)

We spoke about the show recently by phone. Here’s an edited look at our chat.

Q.  The vivid story of Five Points is not one that’s covered in our history classes.  How much did you know before you auditioned?

A. I didn’t know much at all. It’s funny how much our history books really leave out.   Unfortunately, a lot of it has to do with leaving Black history out . . . I did not know specifically about the Irish and Black history in New York City and how it was an area of Irish immigrants, Black previously-enslaved people, some free Blacks who were business owners, and how they all lived together and created music together and created dance forms . . . It was really fascinating and it made a lot of sense. You had these people who were all at the bottom of the barrel, who were actually coming together because of that – until the Civil War draft riots really tore that apart.

Q. What brought you to the show originally?

A.  About a month after we closed “Carousel”… my agent sent me in for “Paradise Square.”  And I thought, are you sure?  I don’t think this is a great fit for me because it sounds like a dance heavy show.  And he said there’s no dance call at the audition, they’re looking for somebody to understudy this [main] Irish role.  They had already cast the whole show. They were just looking for covers.  So, I said, okay I’ll go in, it’s fine . . . And I came out of the audition, like, I don’t think that went well. I won’t be hearing anything.  And about four days later I got the offer to go to Berkeley.

Q. So you were involved as the show was being created?

A. We were at Berkeley Rep for four months.  We were developing the show with (director) Moises Kaufman, (choreographer) Bill T. Jones, and Larry Kirwan – he was the original conceiver of “Paradise Square.”  The Berkeley experience was about two months of developing the material, and two months of performing it.  After that was done, there was talk of it moving to Boston or Chicago or Canada before it went to Broadway.  Then, as we all know . . . the pandemic hit and everything got delayed . . . Somehow, the little-engine-that-could came back and went to Chicago for its pre-Broadway run this past August for a few months. And then we came back and started it here on Broadway.

Q. Having been in so many well-known shows, it must be different to share a new story with audiences who know little about what they’re going to see.

A. You’re totally right.  I remember taking my first bow for “Carousel” and being so proud that I was on a Broadway stage.  And then when I took my first bow for “Paradise Square,”  I felt like I had helped actually create a piece for these people, which was more exciting in a lot of ways . . . People haven’t been exposed to this part of history, and every single night the audience gives us a standing ovation [at the end], starting from the first chorus members who bow . . .  They’re excited about the show and the music, the dancing, and also a story they didn’t realize is still repeating itself today.

Q. Is there a moment in the show that connects with you personally?

A. There’s one moment I love that I get to do.  My mother noticed it . . . I’m playing a character that doesn’t have a name or anything.  It’s in the second number, introducing the Irish people who have just come off the boat.  A song is being sung and my character walks across the stage to the officer who’s stamping the papers for them to get into the country.  And that, for me, is a moment that’s very special, knowing that I had family that did that. And imagining how it felt to be on that ship for weeks and weeks.  People were dying on those ships, just to be given entry into the possibility for a new life.