Dermot Byrne and Yvonne Casey, “As We Feel It” • Byrne’s Donegal-influenced accordion playing has been a hallmark of Altan for nigh on three decades now, while Casey is a fine exponent of the Clare fiddle style who has played with the Ceili Bandits as well as traditional denizens like Micho Russell and Kevin Griffin. Both also have developed a propensity for composing tunes that are squarely “in the tradition” – generally eschewing rhythmic and melodic divergences or novel time signatures that have become familiar features (not necessarily unwelcome ones) in contemporary Irish/Celtic tunesmithery. And that’s the focus of this album, entirely comprised of Bryne and Casey originals.

But it’s not even so much what they play – and what they play is wonderful stuff – as how they play it that makes “As We Feel It” a pleasure. Unaccompanied, Casey and Byrne do straight-up unison, matching each other note for note with aplomb and vibrance. Take the pair of Casey reels, starting with “Native Codes,” which has a couple of nifty recurring phrases that almost sound plucked from Appalachia; the set continues into the exuberant major-key “Yellow Gem,” with an effusive little flourish in the B part. A set of energetic Bryne reels, “Tribute to Finbarr and Joe/The Milbrae Rose,” makes for a brilliant contrast in tone and mood, as does Casey’s jig medley, “Herbs in the Burren/Rainbow Light.”

Byrne and Casey go beyond jigs and reels: “Citi’s Dance” by Byrne is an elegant, deft barndance, while Casey’s “Waltz for Cáilín” is similarly sweet-toned. “PK’s March” (Byrne) is a particularly stirring number, with some punchy accents and phrasing.

The two also each have a pair of solo tracks: Byrne’s jigs “Lag Na Carriage/Trá Bán” and the aptly-named “Freewheelin’,” which he plays first as a highland – that Donegal twist on the Scottish strathspey – and then as a rip-roaring reel. Casey combines her moody “Tracin’ Jig” with an intricate reel, “The Sparking Light,” both set mainly in the fiddle’s lower register and giving a different, darker feel; her air “Cnoc Na Rí,” which closes the album, is expressive to the hilt, with a little vibrato here and there to accentuate the emotional quality.

There is no shortage, fortunately, of tunes that are from the tradition. But those that are “in the tradition” can add depth and dynamism to what’s already there, and Byrne and Casey have accomplished this to a delightful degree.  [dermotandyvonnemusic.com] 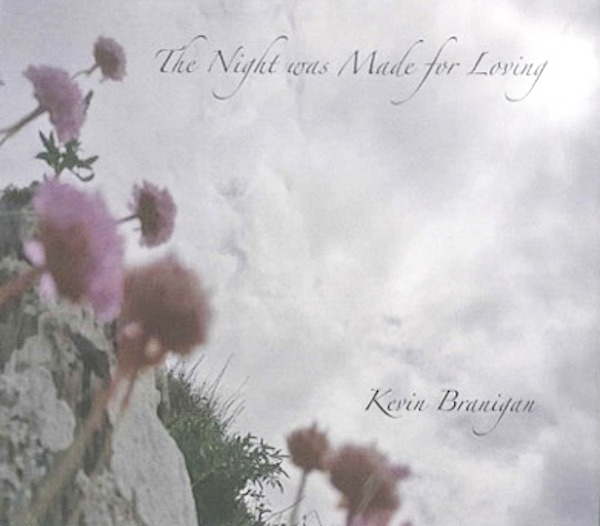 Kevin Branigan, “The Night Was Made for Loving” • Branigan is a Drogheda native who has been quite active in arranging traditional music events as well as performing at them, such as the Drogheda Traditional Music Weekend; he was a member of the quartet Reynardine and has sung with his brother Patrick as a duo and as part of Harmony Group Sundays Gate Quartet. Branigan also spent some time in Somerville around 2009-11, and made an appearance here and there, including at The Burren.

Although he has the trad credentials, Branigan is also firmly planted in the contemporary folk domain, as he shows on “The Night Was Made for Loving,” a mellow, easy-on-the-ears affair that – with the exception of two tracks featuring guitarist Garret Brady – consists of him singing with his own guitar or unaccompanied. There’s not exactly a lot of levity here: Most of the songs, whatever their origins, tend to be on the somber or dark side. But that doesn’t make the album unlistenable by any means.

“Jim Jones,” for example, a song from the era when great numbers of British and Irish were deported to Australia – often for dubious and/or political reasons – balances the descriptions of injustice and mistreatment with a retort of resilience and defiance, ably voiced by Branigan but not excessively so. He employs his own melody to W.B. Yeats’s mystical, poignant “Song of the Wandering Aengus,” which he sings unaccompanied and with both reverence and tenderness. Branigan shows an astute choice in repertoire with “Out of the Window” (often associated with the renowned Paddy Tunney), which captures attention because of its strong similarities to the better-known “She Moved Through the Fair” – the first two verses are almost identical – and therefore makes the plot’s Big Reveal all the more striking and sorrowful.

Other traditional songs on the album include a Fermanagh version of the tragic “Molly Bawn,” the heartstrings-tugging night-visiting song “Bay of Biscay,” and true-love-turned-false lament “Black Dog, Sheep Crook” (also known as “Sheepcrook and Black Dog,” and recorded by Steeleye Span, among others).

The contemporary material makes for an arresting blend, from “There But for Fortune” – perhaps Phil Ochs’s most enduring song – to Gordon Lightfoot’s “Mother of a Miner’s Child,” like a Walker Evans photo put to music, to “Medgar Evers’ Lullaby,” written by Richard Weissman not long after Evers’s murder and recorded by Judy Collins on her 1964 live album – even after almost six decades, it makes for some unsettling listening, given the current state of affairs.

Branigan also covers “Leave the Wood,” written by fellow Droghedan Gerry Cullen, well known for his work with The Voice Squad – an impassioned song of farewell (perhaps temporary, but no promises) with vivid imagery.

“The Night Was Made for Loving” is a quiet album in a very noisy age, and therefore well suited for periods of contemplation – early on a soft rainy morning, perhaps, or on a moderately paced drive through rural landscapes. We all like that kind of thing, right? [Contact Branigan at caoimhinobranagain@yahoo.com]