Eamon Flynn, “Anywhere But Home” • It’s not as if there haven’t been tributes to Dublin aplenty down through time, in art, music, literature, stage and screen, but this album certainly is one of the more personable and heartfelt ones in recent years. Flynn is a native “Dub” now based in San Francisco who has cultivated a career as an outstanding keyboardist  (he was a musician for “The Commitments” and has played with such diverse luminaries as Boz Scaggs, Michelle Shocked, Evelyn “Champagne” King and the Black Family) and singer-songwriter across multiple genres: rock, soul, jazz, gospel, funk, blues, R&B, but also with a solid footing in Irish music, as demonstrated in his 2019 release “The Irish Channel,” which includes a fascinating bluesy reworking of the traditional song “Muirsheen Durkin.”

“Anywhere But Home” is largely a series of reminiscences and ruminations by Flynn of Dublin lore and social history – not the stuff of travelers guidebooks and visitors bureaus, but little pleasures, slices of life, and odd, even macabre tales: the darkly comic “The Sack-’Em-Ups,” about body snatchers who sold newly buried corpses to medical science, to which Flynn lends a jaunty, whistle-past-the-graveyard beat (in the album sleeve notes, he points out that Sack-’Em-Ups are still with us today, although plying a different trade).

“Shrouds are blowing in the wind

Twelve guineas for a skeleton

Keep an eye on Bully’s Acre

Keep watch on the undertaker

‘Cos not enough are being hung

To educate the surgeon”

“The Anne’s” is a collection of loving if bittersweet visual memories of a park on Dublin’s north side that, in all its loveliness, exhibited society’s dividing lines: “And we walked between oak trees and pines/In the fenced-off red stables we could see through the gables/A world that was subtly denied." “Penalty Shootout in the Dockers” fondly recalls the 1990 World Cup when Ireland reached the quarterfinals and captivated the nation in doing so (Bostonians know something about collective pride in sporting achievements): “Every dog, woman, man, child/Glued to the television/But I was with me green and orange/And white down on the quays/Penalty shootout in the Docker’s/Come on, ye boys in green.”

Flynn relates a far different kind of shared experience in “Ringsend Balcony Bingo” of how, early in the pandemic, Dubliners played socially distanced games of Bingo on the balconies of their flats (“Two fat ladies, 88/Lucky 7, red raw and garden gate/Legs 11 and goodbye teens”). The pandemic also provided an inspiration and impetus for “Baile Átha Cliath” (the Irish name for Dublin), for as he explains in the liner notes, “The thought of going out for a day in the sun followed by a night on the razz in Dublin sounded impossibly idyllic.” The song is a gratified amble to a subtle but infectious Latin rhythm, with references to the statue of legendary Irish rocker Phil Lynott and denizens of Grafton Streets, and some typical Dubs’ self-deprecating humor (“It’s only sunny twice a year/But when it comes, I want to be here”).

Here is a good place to mention the musical dimension of "Anywhere But Home," which is excellent. Flynn's keyboard playing sounds like he's equally at home in a concert hall, pub or jazz cafe, plus he's supported by the likes of Irish music notables like John Doyle (guitars, mandola, bass, bouzouki, backing vocals), Michael McGoldrick (flute, whistle, bodhran), Mick McAuley (accordion), Athena Tergis (fiddle) and Todd Denman (uilleann pipes, whistle): Their presence serves as a kind of homing device, reinforcing the connection between Flynn’s musical vision and the place where it flowered – most appropriately, for example, in the instrumental play-out at the end of “Baile Átha Cliath.”

Two tracks feature Flynn on his own: “Meeting of the Waters,” a Wicklow song written not by Flynn but another Dubliner, namely the multi-talented Thomas Moore (“a rock star in his day,” writes Flynn) – Flynn’s gorgeous piano accompaniment fits Moore’s lyrics to a W. The other solo track is the album’s finale, “Sorry for Your Trouble,” a commentary on the Irish rituals, customs, mores and behaviors around death that soothe and comfort, yet do not preclude honest emotion (“We all improvise/From a well-rehearsed script/But sometimes the moment intrudes/And the house is full of sound/As the sun goes down”).

It’s an aptly elegiac reminder that no matter our beginnings, in Dublin or elsewhere, we all end the same way. [eamonnflynn.com] 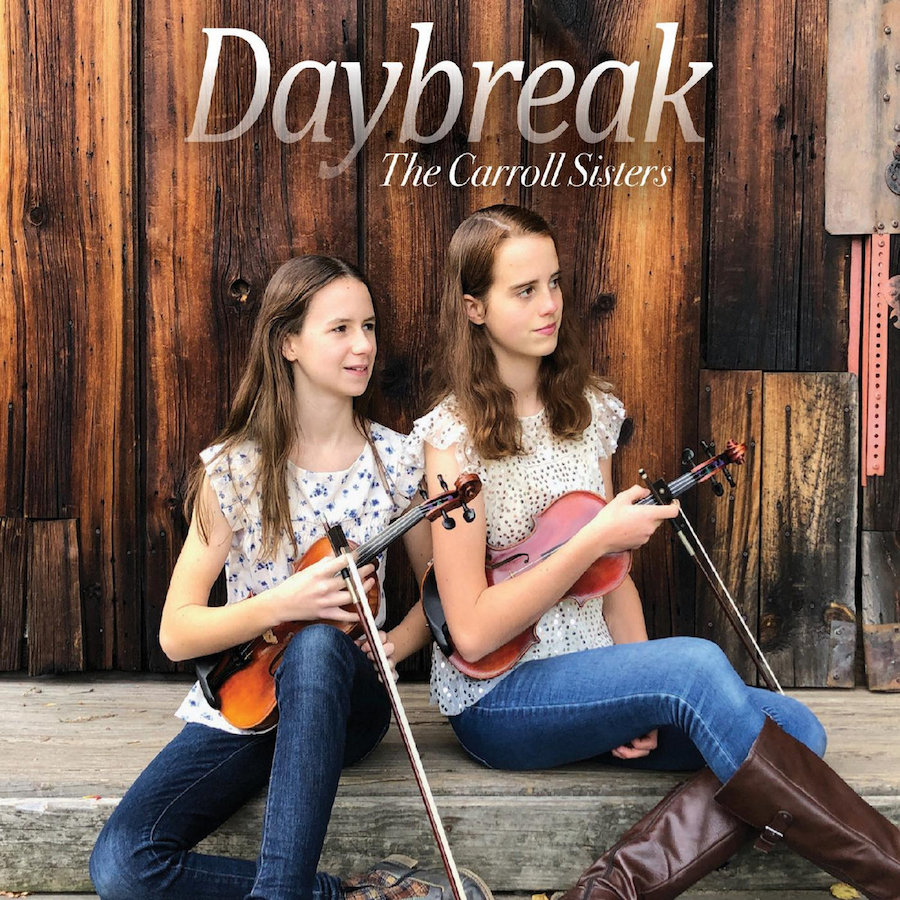 The Carroll Sisters, “Daybreak” • The Carroll Sisters are fiddlers Emilie and Nora – 16 and 14 years old, respectively, when this album came out at the very end of 2021 – from Simsbury, Ct., who began as kindergarteners playing the Suzuki method but, thanks in large part to their parents’ interests and experiences, shifted to the Celtic side. While a lot of their style and repertoire comes from Scotland and Cape Breton, the sisters have had a considerable immersion in the Irish tradition, too, and in fact both qualified for the All-Ireland Fleadh in 2018 (no small feat, considering they had to go through the highly competitive Mid-Atlantic Fleadh in New Jersey).

Emilie and Nora have been blessed with many mentors and role models who are prominent figures in the Celtic scene, and “Daybreak” is their way of honoring these relationships, among them accordionist John Whelan and fiddlers Jeanne Freeman, Katie McNally and Dylan Foley, all of whom appear on various tracks. Along with cellist Sammy Westein, with whom they regularly perform, the sisters also are joined here by well-established musicians like pianist Neil Pearlman and guitarist Conor Hearn (of the Boston-area duo Rakish).

Albums such as these, featuring young, i.e., pre-adult, musicians, usually raise two questions: whether they have the stamina and focus for professional-quality recordings, which have little forgiveness for weak playing or even slight flubs (for that matter, not all adults can handle the task, either); and whether they’re overshadowed by the adult musicians playing with them. On “Daybreak,” the answers to those questions are, in order, “Yes” and “No.”

The Carrolls show themselves more than capable of playing sometimes quite extensive medleys – “Highland Heritage,” which consists of five Scottish/Cape Breton tunes, clocks in at more than six minutes – nailing the transitions between tunes and keeping the energy constant or, where called for, turning it up a notch. They don’t always go the easy route, either, employing pretty ambitious arrangements at times that display imagination and, yes, showmanship (which is not an insult): “Peoples’ Legacy,” for instance, begins with one fiddle playing long, bowed notes, while the other starts with a few plucks and then eases into a gradually developing rhythmical riff that, eventually, both sisters take up in harmony and slowly accelerate until they transition into “Tommy Peoples’ Reel,” a composition by the legendary Donegal fiddler (and one-time Boston resident).

But there are plenty of instances on “Daybreak” where Emilie and Nora go more for the straight-up approach, such as their majestic setting of Turlough O’Carolan’s “Madame Maxwell,” joined by Whelan. The Carrolls’ repertoire, incidentally, has some good pedigree to it: In addition to two O’Carolan pieces (the other being “Fairy Queen”) and the aforementioned reel by Peoples, there are tunes by Ed Reavy (“Sean Quinn’s”), Bobby Casey (“Crosses of Armagh”), Finbarr Dwyer (“Holly Bush”) and John Morris Rankin (“Hull’s Reel”).

Oh, and they also write their own stuff, too, as they demonstrate on their solo tracks: Emilie’s “E Medley” leads with her Cape Bretonesque strathspey “Snapping Turtle Pond” – named, she explains, for an “abusive” chelydra that lurked at her grandparents’ house – and finishes off with a pair of venerable Irish tunes, “Holly Bush” and “Dr. Gilbert”; Nora’s “Flight of the Fireflies” (also inspired by visits to her grandparents) is a playful hornpipe-like lark that segues seamlessly into a Cape Breton strathspey, “Moxham Castle,” and thence into an Irish reel, “The Dawn.” Pearlman accompanies both sets with his distinctively peripatetic piano style, and in neither case do the sisters sound as if they’re over-matched; quite the contrary, they flourish in the duet.

All told, the Carroll Sisters set the right tone on “Daybreak,” paying homage to their mentors while also asserting their own musical personalities and interests – and in so doing, give listeners quite a lot to look forward to as Nora and Emilie continue to build on what they’ve done thus far. And happily, they’re close enough to Boston (they held their official album concert at Club Passim in late March) that local audiences can witness this growth for themselves. [carrollsisters.com]