SíFiddlers from Donegal will be part of the East Durham Irish Festival livestream May 29 and 30.

East Durham, NY, is the place to be Memorial Day Weekend

•East Durham, NY, is a familiar place on the map for Irish music enthusiasts – it’s the home of the Catskill Irish Arts Week, which offers concerts, workshops and about a billion sessions every July. But the town also hosts the East Durham Irish Festival, which, after sitting out 2020 because of the pandemic, is back this year as a virtual event May 29 and 30, presented with Irish Music Magazine Facebook and broadcasting live for 28 hours.

Among the performers will be singer Seán Keane; musician-vocalist-scholar Mick Moloney; singer-songwriter Mickey Coleman with the Pride of Movayne (including Coleman’s wife, Erin, and her parents and siblings, all members of the renowned Mulvihill family); the all-female Donegal ensemble SíFiddlers; singer Andy Cooney; and ballad band Derek Warfield & the Young Wolfe Tones.

Also in the line-up are The Screaming Orphans, Young Dubliners, Connla, BackWest, Maca, Mary Courtney, Billy McComiskey & Baltimore Salute, Trad on the Prom and the trio of Dan Gurney, Christina Dolphin and Dylan Foley, among others.

The festival also will include special segments on song, dance, poetry, food, sport, and other aspects of Irish culture, such as Irish American history in song with Derek Warfield and a retrospective on union leader Michael J. Quill, namesake of the nonprofit in East Durham that organizes this and other Irish events.

Information is available at the festival website, eastdurhamirishfestival.com, and the Irish Music Magazine Facebook page at facebook.com/TRADIMM.

•Paula Carroll, host of Clare FM’s popular traditional Irish music show “The West Wind,” teamed up recently with the Ennis-based arts center glór to produce an online concert-and-chat series, “Folk Nights at glór,” in which Irish musicians perform at the venue and engage in interviews with Carroll. The series will have a short run for now, with three installments, the last of which is May 6, featuring the duo of Donegal accordionist Dermot Byrne and guitarist Steve Cooney. 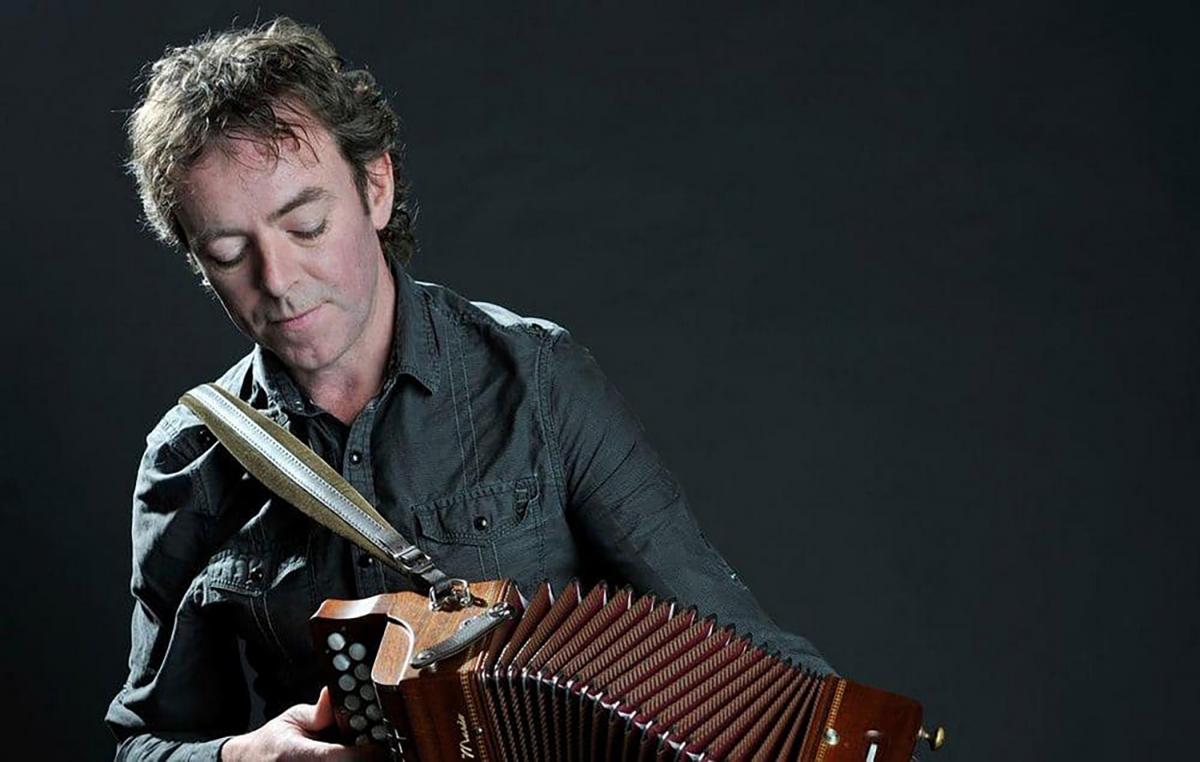 Byrne is perhaps best known as a member of the band Altan but also has performed or recorded with The Chieftains, Frankie Gavin and Seamus and Manus McGuire, among others. He’s also gone farther afield in Celtic music, dueting with Ontario fiddler Pierre Schryer and French harpist Florian Blancke. Among those appearing on Bryne’s first solo album, released in 1996, was Cooney, an Australian native who has been a mainstay in Irish music for the past few decades. Cooney, who was presented a Lifetime Achievement Award from RTÉ last year, has had a hand in some 250 recordings as a musician, producer or engineer, encompassing not only Irish and Celtic but rock and country music as well: His many collaborations include The Chieftains, Andy Irvine, Seamus Begley, Patrick Street and Sinead O’Connor.

For information on accessing the show, go to glor.ie.

•For almost four decades, the Orkney Folk Festival has been bringing Celtic music performers and Celtic music lovers to the archipelago, about 50 miles off the northeastern tip of Scotland. The festival is in virtual format May 27-30, with a potent roster that features not only Orcadian and Scottish music – traditional and contemporary – but also Nordic, reflecting Orkney’s proximity to Scandinavia.

Among those who will be on hand is the fiddle-piano duo of Kevin Henderson and Neil Pearlman, who gave one of their first performances at the 2019 Boston Celtic Music Fest (Pearlman is a native and current resident of Maine with many ties to Boston, where he lived for several years). Karine Polwart, among the finest folk/acoustic singer-songwriters to come out of the UK in the past few decades, also is on the bill, as are The Wrigley Sisters (Jennifer on fiddle, Hazel on guitar and piano), whose blend of traditional material with jazz, blues, ragtime and other contemporary vibes helped put Orcadian music on the folk revival map. Acclaimed Scots singer Siobhan Miller is a familiar face, and voice, to “A Christmas Celtic Sojourn” attendees of recent years, while the inclusion of high-octane trio Talisk (Hayley Keenan, fiddle; Mohsen Amini, concertina; Graeme Armstrong) is good news for those US-based fans who missed out on seeing them when the band’s tour was cut short last year.

There’s also Blazin’ Fiddles and its diversity of Highlands-and-Islands fiddle sounds backed with guitar and piano; another top-notch ensemble, Dàimh, which is steeped in Gaelic traditions of Skye and West Lochaber; and Brìghde Chaimbeul, who draws on piping traditions from Ireland and Eastern Europe as well as Scotland – her 2019 release “The Reeling” earned widespread critical praise and a couple of awards (she also played an enchanting concert with her Boston-based, harp-playing sister Mairi at Harvard Square’s Club Passim a few years back).

To see the rest of the line-up, and for ticket details, go to orkneyfolkfestival.com.

•The Lock Inn is a London-based online venue that has produced live music and other kinds of events (such as quizzes and charity fundraisers), and this spring has presented the digital concert series “IMDL: Irish Music and Dance in London.”

On May 14, the series will host The Boruma Trio, which brings together music traditions from North Tipperary and East Clare. Representing the North Tipperary influence is Eileen O’Brien, who has been an All-Ireland champion in slow airs and is a composer of tunes; she also comes from a distinguished family music legacy that includes her father, renowned B/C accordionist Paddy O’Brien, her grandfather, Jim Seery, a co-founder of Comhaltas Ceoltoirí Éireann, and her mother Eileen Seery, a noted singer. East Clare accordionist Andrew MacNamara – brother of concertina player Mary MacNamara – has been a member of Skylark and the esteemed Tulla Ceili Band. In addition to playing tin whistle, Geraldine Cotter of Ennis is among the more influential pianists in the Irish music tradition, having published the first tutor on the subject; she’s also recorded on more than 20 albums, including her debut solo “Piano+” and is author of “Transforming Tradition: Irish Traditional Music in Ennis, County Clare 1950-1980.”

Singer, musician and composer Saileog Ní Cheannabháin, who will perform on May 28, is a Dublin native but has spent a lot of time in Iorras Aithneach, part of the Connemara Gaeltacht, and taken on that region’s sean-nós singing style; she also conducted a study of its songs and singers while at University College Cork, winning the coveted Sean O’Riada Prize, and released an album of songs collected by Seamus Ennis from singers from Iorras Aithneach. Ní Cheannabháin’s talents extend to piano, fiddle and viola, and to classical piano as well.

For information on accessing these shows, go to www.thelockinn.io/imdl.

•Those who like their Irish/Celtic music flavored with a touch of mandolin will certainly appreciate the concert being livestreamed on May 15 at 7:30 p.m. by New Hampshire’s Concord Community Music School as part of its annual May Mandolin Festival. This year’s festival includes Marla Fibish, a leading light for the mandolin in Irish traditional music, emphasizing the instrument’s qualities of tone and sustain over speed, with a superb ability to tease out ornaments and triplets, as demonstrated on her 2020 solo album “The Bright Hollow Fog.” She’s also one-half of the duo Noctambule with her guitarist husband Bruce Victor.

Also appearing at the festival is its co-organizer David Surette, a founding member of the New England contra dance band Airdance who often performs contemporary as well as traditional music with his wife Susie Burke at many festivals and venues; and Baron Collins-Hill, whose tastes run to bluegrass, jazz and open improvisation, and who plays with fiddler Julia Plumb in Velocipide.

The festival offers Zoom workshops and group jams, too. Details at ccmusicschool.org.

•Yes, there is in fact a World Fiddle Day, observed on the Saturday closest to May 19 – which, in 2021, is May 22. And while there are undoubtedly any number of formal or informal celebrations of it every year, the World Fiddle Day Scartaglin certainly deserves notice: The result of efforts from several civic and arts organizations in Kerry, it’s a multi-generational salute to the Sliabh Luachra fiddle tradition, and the larger music and song legacy, in the area around Scartaglin, Cordal, and Castleisland.