‘A clatter more’ from Andy Irvine

Andy Irvine, “Old Dog, Long Road, Vol. 2” • When Irvine released “Old Dog, Long Road, Vol. 1” two years ago, he suggested the possibility of a follow-up: “If this album is well received,” he wrote in the liner notes, “there will be a clatter more!” Irvine fans have apparently done their part, because here’s another double-CD helping of rare or previously unreleased recordings from 1961 to 2015 of Irvine, solo and in various collaborations, made in studios, concert halls, clubs, and pubs, and even at home. It’s one more welcome opportunity to appreciate the talents, skills, inventiveness, and imagination of this most influential singer, songwriter, and musician, a cornerstone of the modern Irish music revival.

As with Volume 1, there’s no chronological order to the tracks, and some of the material, particularly the live recordings, will be familiar to those who have listened to Irvine through the years. Or rather, somewhat familiar, as is the case with a 1970 home recording of “A Blacksmith Courted Me.” The song has long been regarded as one of Irvine’s signature creations, taken from the UK folk tradition and joined to a driving Eastern European rhythm and bouzouki accompaniment; it became an instant showstopper for Planxty, which in 1970 was still a couple of years away. But while Irvine was already using the trademark Balkanesque arrangement then, here he plays the song in a more “conventional” time signature to a mandolin backing. Easy to speculate, but perhaps Irvine, having come up with such an innovative approach to “Blacksmith,” felt like connecting with the song on a more basic level and affirming its fundamental narrative and emotional character. Suffice it to say, he does.

Speaking of Planxty, there’s a live track of “As I Roved Out” – one of two different songs by the same name they recorded on their second album, one led by Irvine, the other by Christy Moore – from 1975, near the end of the band’s “first run” when the line-up consisted of Irvine, Liam O’Flynn, Johnny Moynihan, and Paul Brady. It’s certainly a treasure, given that this incarnation of Planxty never did release an album, and more so because of Irvine’s masterful delivery. Volume 2 also contains two fine representations of Mozaik, the unique Irish/American/Pan-European quintet he and former Planxty mate Donal Lunny co-founded: his “The Wind Blows Over the Danube,” a reminiscence of his travels in Hungary, from the band’s 2019 album; and “The Snows,” an exquisite traditional Greek song Mozaik recorded with guest vocalist Chrysoula Kechagioglou but ultimately left off the album.

We also encounter more samples of Irvine’s great interest in American folk music, and specifically Woody Guthrie, such as in the 1961 home recording of an 18-year-old Irvine singing Guthrie’s “Hobo’s Lullaby” – complete with a reasonable facsimile of an Oklahoma drawl (perhaps worth noting that at this time Irvine was still pursuing an acting career). “Facing the Chair” – which he first recorded with Patrick Street, and plays solo here – was inspired by Guthrie’s song project on Sacco and Vanzetti; in addition to researching the case, Irvine even made a visit to the courthouse in Dedham where much of the infamous trial took place. And finally, there’s a 1969 recording of Irvine’s “You Fascists Bound to Lose,” clearly in the spirit of Guthrie’s “All You Fascists Bound to Lose,” with barbs aimed at, among others, German neo-Nazis, dictators António de Oliveira Salazar and Francisco Franco, and, closer to home, Rev. Ian Paisley.

Among Irvine’s hallmarks as a songwriter are his musical biographies, intelligently and eloquently blending historical detail and context with first-person perspective to make the events compelling (think of a good TV mini-series, like “John Adams” or “Chernobyl,” and you’ll get the idea). Volume 2 provides examples such as the aforementioned “Facing the Chair,” as well as “Rude Awakening” (recorded live at Northampton’s Iron Horse Music Hall) – his portrayal of the ill-fated Shackleton Antarctic expedition – and arguably his best one, “Douglas Mawsom,” about a Shackleton survivor who later endures another Antarctic ordeal: Irvine starts with a pensive three-verse prelude that abruptly transitions to a gripping, up-tempo recounting of the unimaginable horrors which befell Mawsom and his colleagues; the live solo version here gives the song, and Irvine’s enthralling performance of it, a pulse-pounding empathetic quality that lingers (you’ll never complain about clearing snow off the sidewalk again).

Most of all, both “Old Dog, Long Road” volumes attest to Irvine’s well-deserved stature in Irish folk music. The Irish song tradition has long been the showcase for Irvine’s artistry, and his respect toward those who have kept the tradition alive – he has always been quick to credit traditional singers like Brigid Tunney (from whose recording he learned “As I Roved Out”), Robert Cinnamond (“Jack Mulroe”), and Eddie Butcher (“Carrowclare,” “Banks of Newfoundland”) as sources. And Irvine does such justice to the songs, and the tradition, by putting the words and story at the center even while skillfully weaving countermelodies and harmonies on bouzouki or mandola – the effect is all the more striking on a couple of tracks with accompaniment by Lunny on bouzouki (“The Blind Harper”) and guitarist Rens van der Zalm of Mozaik (“Sweet Bann Water”).

Which is not to overlook Irvine’s ability in the instrumental tradition: Listen to his 1983 duet on mandolin with fiddler Nollaig Casey on a set of hornpipes, a solo bouzouki rendition of the jigs “Contentment Is Wealth” and “Shores of Lough Gowna,” and another solo, on mandola, of the unbelievably intricate “Drunken Sailor” hornpipe, which deserves a points-for-degree-of-difficulty rating.

This October, Irvine is scheduled to perform with Paul Brady to celebrate their landmark 1976 album, so it’s reassuring to see that his long road still has some miles left on it. [andyirvine.com] 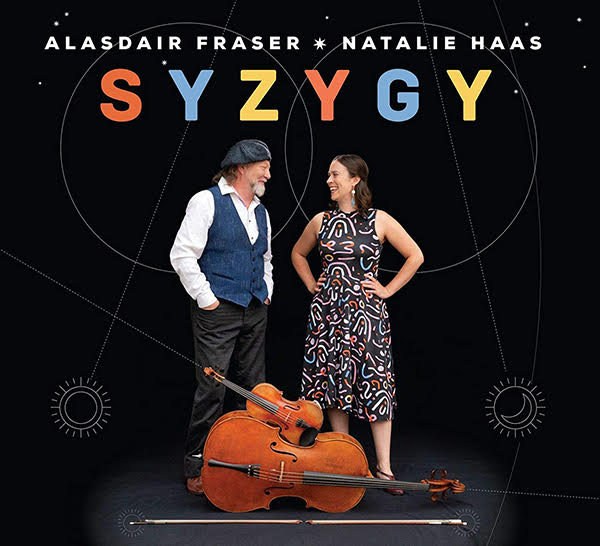 Alasdair Fraser & Natalie Haas, “Syzygy” • It has been two decades now since this pioneering fiddle-cello duo began carving out its unique place in Scottish/Celtic music, and Fraser and Haas have been marking the milestone with a number of virtual/livestream performances these last several months, as well as the release of this, their sixth album.

But where an anniversary recording might take a backwards glance at past material, perhaps with a passel of guest stars, "Syzygy" is simply Fraser and Haas, going in a new direction with all original compositions – making their own music "from the ground up," as Fraser put it in a recent interview – and bringing to bear the manifold influences they've soaked up over the years.

The album’s title is appropriate in many ways: “Syzygy” is defined as the joining of any two entities without losing the individual characteristics of either one. The word, of course, aptly describes the Fraser-Haas dynamic, their archetypal “ducking and diving,” in which they exchange riffs, trade off melody versus rhythm, and otherwise converse in various tones of emotion and intensity. It also applies to much of the album's content: There are so many styles and genres orbiting throughout – Scottish, Scandinavian, Spanish, English, Appalachian, classical, jazz, swing, gypsy – and sometimes they seem to align within a single phrase or passage. Yet there’s nothing muddled or dilettantish in what Fraser and Haas do; in fact, “Syzygy” comes off as quite a fascinating, well-ordered universe of sounds.

For instance, the Haas composition, “Sweglish/Modally Challenged,” brings together elements of Scandinavian and English music – “a 3/2 hornpipe/polska hybrid,” as she describes it – and ends with an accented reel “that can’t quite decide what mode it’s in.” “Broadway for Greg and Tim," a wedding commission, cleverly juxtaposes rhythms and time signatures as well as genres – including, improbably, a brief foray into show tunes – while "Caledonian Carolina" is an exuberant blend of Scottish and old-timey with a little experimental improv near the end.

Fraser and Haas more fully explore their ideas and inspirations by largely moving away from the format of grouping multiple tunes in medleys and, in some instances, the A-part/B-part structure typical of much traditional music. “A. Lien of Alesund” (a Haas tribute to Norwegian fiddler Annbjørg Lien), displays a complex, sophisticated and adventurous approach to arrangement typical of the album, building from a delicate, subdued opening with beautifully bleak harmonies redolent of the Nordic climes to graceful, vibrant sections, and cadences.

Fraser’s moody “The Dreamer and the Jester,” meanwhile, technically may combine an air with a reel, but feels holistic, more like a single piece with adagio and vivace movements. In the same vein is his “La Llegada de Los Trovadores” (“The Arrival of the Troubadours”), which draws on imagery and memories from a music camp in Spain in which he’s involved. In comparison, tracks like “Moccasin Walk/Ackley Lake” and “Rest & Be Thankful/Start Your Engines” have a more familiar Celtic quality to them, but in this case constitute a point of departure.

In an interview prior to their BCMFest appearance in January, Fraser described “Syzygy” – the album and the word – as a two-part artistic process. First, “searching, or maybe questioning,” and then “celebrating” – “When things come into alignment, and you say ‘Wow.’” He added, “We’re holding up ideas for examination, and as an artist, I suppose it’s a luxury, but it’s also your bread and butter. It’s what you do.” Not everyone does it like Fraser and Haas, of course, and that’s why, two decades on, they continue to make outstanding music. [alasdairandnatalie.com]