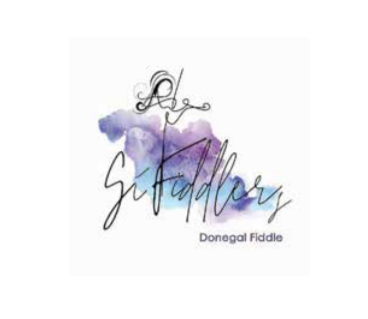 The SíFiddlers, “SíFiddlers” • If you like lots of Irish fiddle – and fiddle only, with no other melody instrument and nary a guitar, bouzouki, piano, or any such accompaniment about – then put this album on your must-listen list. And if you like Donegal fiddling, well, you should move it to the top of said list.

The SíFiddlers is an ensemble of 13 female fiddlers from dear old Dún na nGall, including well-established, renowned performers like Altan co-founder Mairead Ni Mhaonaigh, Liz Doherty, and Brid Harper, and the vanguard of more recent generations such as Clare Friel (of The Friel Sisters), Aisling Drost-Byrne, and Eimear McColgan; also in the ranks are Tara Connaghan, Theresa Kavanagh, Claire Gallagher, Melanie Houton, Roisin McGrory, Clodagh Warnock, and Denise Boyle. They originally came together at a festival in 2018 – their set climaxing with 40-strong female fiddlers in all – and, more recently, for the broadcast from this year’s virtual-format Fleadh Cheoil.

The raison d’être for The SíFiddlers is straightforward but compelling: Donegal has a time-honored, exalted fiddle tradition, producing luminaries like Tommy Peoples, Paddy Glackin, and James Byrne (father of Aisling), but it’s only in recent decades that female fiddlers – whether from Donegal or anywhere in Ireland, for that matter – have been recognized and celebrated with any consistency. The multi-generational aspect of the ensemble clearly demonstrates how deep-rooted and sustained a presence women have in this music.

Listeners may or may not appreciate the distinguishing characteristics of Donegal fiddle, such as its commonalities with Scottish tradition, especially in terms of repertoire – strathspeys, Highlands, mazurkas – and frequent use of bowed triplets, derived from the influence of the highland bagpipes. But in any case, the SíFiddlers sound is exuberant and enthralling, whether they’re playing as a full ensemble (in unison, which is not as easy as it seems) or in smaller combinations.

The Donegal fiddle tune canon is well-represented here, such as with reels “Jackson’s/The Oak Tree”; mazurkas “Francie Mooney’s/Vincent Campbell’s”; a gloriously rendered hop jig, “The Silver Slipper,” paired with “The Rannafast Jig”; and a climactic trio of festive reels starting – appropriately enough – with “Paddy’s Trip to Scotland,” the title and character of which underscores the Donegal-Scottish connection.

Easily among the most powerful tracks is the penultimate one, with Ni Mhaonaigh soloing on one of her signature pieces, “Tune for Frankie” – written for her late husband and Altan co-founder Frankie Kennedy – a slow, somber but not sorrowful G-minorish jig, with a gentle drone behind her; the ensemble then takes up another Ni Mhaonaigh original, “The Red Crow,” a dusky reel that toggles between a lower-end A part and a B part that elevates to the higher register.

Incidentally, there is a wonderful story behind the ensemble’s name, which according to Clare Friel comes via the late Kitty Sean Cunningham, a pioneering fiddler, dancer, singer, and storyteller from Teelin (one of the album’s tracks includes a barn dance associated with and named for her). The Gaelic word “sí” (sometimes given as “sidhe”), pronounced “she,” refers to supernatural beings and spirits of varying temperament, appearance, and behaviors, including the much-dreaded banshee. When Kitty Sean was a child, Friel explains, she was admonished for her intent to learn the fiddle; if she did so, she was warned, she would surely be known as a “she-fiddler.”

“So we’ve taken what was a derogatory term and we are using it differently,” says Friel. “It doesn’t have that connotation anymore, because society doesn’t think the same way anymore.”

And somewhere, Kitty Sean Cunningham must be smiling. [sifiddlers.com] 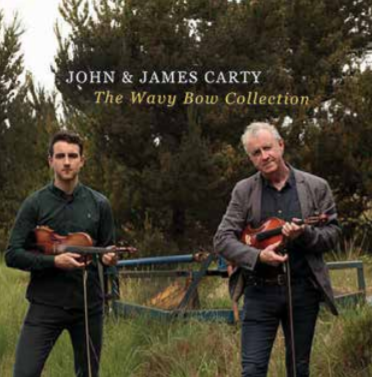 John and James Carty, “The Wavy Bow Collection” • Can we all just pause sometime and offer a thought in appreciation of John Carty? It’s not that he hasn’t received acknowledgement before – he is a former TG4 “Traditional Musician of the Year” after all. But my goodness, you look (and listen) to his body of work, and he’s played with so many notable musicians – Arty McGlynn, Andy Irvine, Kevin Burke, Alec Finn, Matt Molloy, The Chieftains, De Dannan, to name a few – and has an equally impressive recording portfolio: solo releases as well as an assortment of collaborations (including the irresistible At the Racket) of varied sounds and settings. He was even on the soundtrack for the 2015 Saoirse Ronan film “Brooklyn.”

With Carty, Irish music is definitely a family affair: His father was a member of a famous London ceili band, and his daughter Maggie is an accomplished musician – in fact, Carty’s previous recording was with her – as his son James (he has a solo album, “Hiding Daylight in Dark Corners”), as is quite evident here on “The Wavy Bow Collection.” And as with so much of Carty’s other work, the albums show a pleasing diversity in arrangements, mood, and repertoire, due in no small way to John’s talent on fiddle, banjo, tenor guitar, and mandolin, and James on fiddle.

The duo are aided by some stalwart accompanists, many of whom have been with John Carty for years: Brian McGrath (piano, organ), Shane McGowan (guitar, bass), Michael McCague (bouzouki), James Fromseier (guitar, bouzouki), Matt Griffin (guitar), James Blennerhasset (double bass), and a fellow named Mike McGoldrick on snare drum, rumored to be a pretty good flutist.  A special guest is Carty’s brother, James Sr., who plays flute on two tracks: “Corkscrew Hill,” three tunes from Clare flutist Michael Hynes – including the titular jig at the beginning – and “The Hearty Boys Set,” a brisk pair of jigs that includes “Hearty Boys of Ballymote” from the playing of venerable Sligo fiddler James Morrison.

A couple of tracks have the crisply rhythmic vibe of the classic ceili band or 1920s-era vintage Irish orchestra: the “Toss the Feathers” set (“Toss the Feathers/Green Mountain/Plough in the Stars”) and the “Drummer Boy” medley of flings – the latter has an infectious, finger-snapping bounce to it, John’s banjo perfectly arrayed with James’ fiddle. Other tracks display a contemporarily curated feel: John leads the quirky, haunting “March of the Crows” (John credits Kevin Burke, who in turn cited Jackie Daly) on banjo, McCague and McGowan softly layering in the accompaniment and tension until James bursts in with “The Cran Man Jig,” with McGrath’s piano propelling things along.

Another set begins with Andy Statman’s klezmer composition “The Flatbush Waltz,” famously covered by De Danann some years ago and lovingly rendered here by John on tenor guitar and mandolin, followed by a pair of reels, “Colonel McBain” (traced to Scottish fiddler Winston “Scotty” Fitzgerald) and another by the late Tommy Peoples, “Joe Cassidy’s,” all of which showcase John’s superb touch on tenor guitar for playing melody.

Equally pleasing are the tracks with a sparer, more intimate quality, including a father-son fiddle duet along with McGowan that starts with the impassioned “Lord Galway’s Lamentation” (James’ harmony is outstanding) and concludes with that D-dorian masterpiece “Jenny’s Welcome to Charlie.” The Carty-Carty-McGowan combo also is at the helm on “O’Carolan’s Dream,” with John on tenor guitar; the first pass through, with McGowan’s elegant backing, almost sounds like a harpsichord.

Not so incidentally, “The Wavy Bow Collection” continues Carty’s penchant for off-beat, clever, whimsical, or just plain interesting album titles (e.g. “Settle Out of Court,” “I Will If I Can,” “Yeh, That’s All It Is”). In this case, the title comes from a quote by legendary fiddler Michael Coleman, who upon seeing waves gently lapping along the shoreline of New York was heard to say “That’s how I like my bow hand to be” – in other words, effortlessly guiding his bow to crisscross the strings, AKA the wavy bow. Carty’s got an ear for words as well as music. [johncartymusic.net]