From Fionán O’Connell’s portfolio (1990s): Inside My Parents Bedroom

Moving as easily between color and black and white as he moved from analog to digital when that technology shift came, Dublin photographer Fionán O’Connell has snapped literally tens of thousands of photos over a career, amateur and professional, now spanning more than four decades.  His stunning recent work can be sampled on his nicely maintained website: fionanoconnell.com.

But not long ago I happened upon a cache of 50 or so of his older photos dating back to the 1990s, all of them analog, all of them black and white, most of them printed on 6.5 x 8.5-inch semi-matte paper.  Flicking through them, I found myself coming back, over and over again, to an observation, or an assertion, made by iconic American photographer Walker Evans: “Fine photography is literature, and it should be.”

I assume that what Evans meant by that was akin to the well-worn saws that “every picture tells a story” and “a picture is worth a thousand words.”  But much deeper. As I riffled through those old photos, two of them in particular rose from the cache, like trick cards in a magician’s deck, as if to prove Evans’s point. 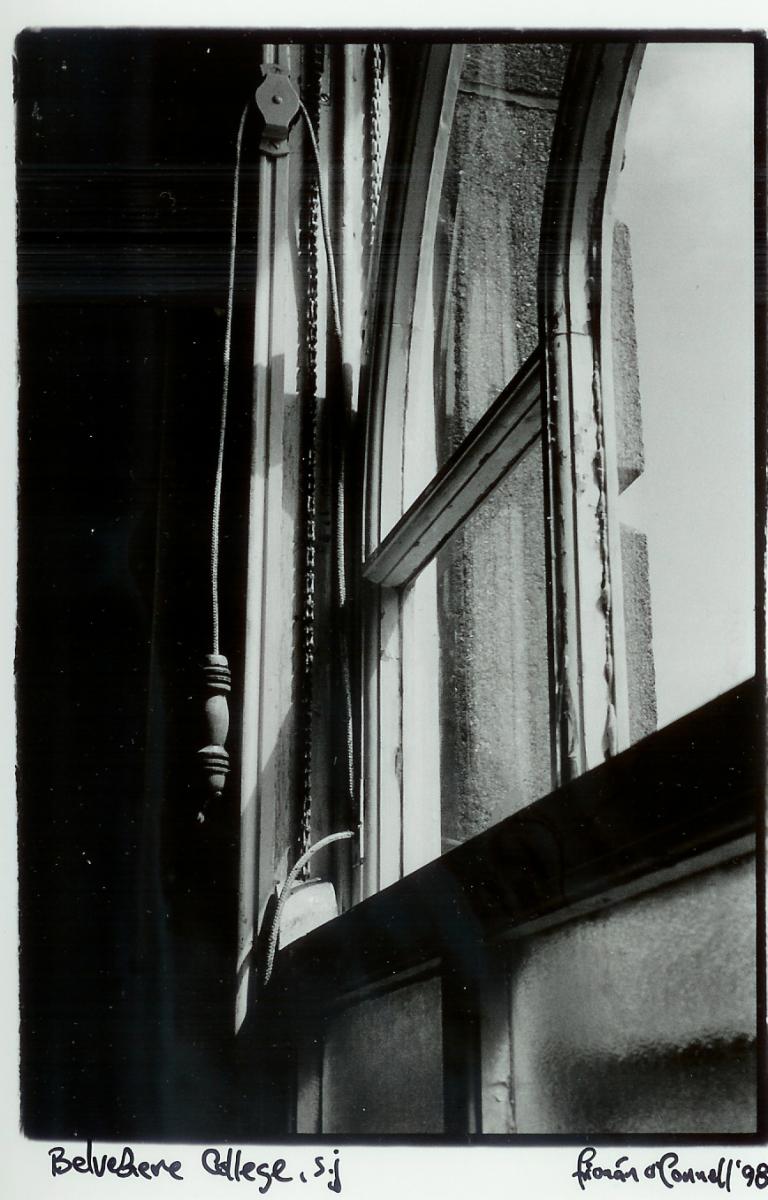 One, dated 1998 and captioned “Belvedere College, S.J.,” is intrinsically “literary” in my eyes, thanks to Belvedere’s most celebrated alumnus, James Joyce.  The famous author’s relationship with Belvedere has been explored both at length and in depth by Joyce scholars (most notably by Kevin Sullivan in his book “Joyce Among the Jesuits” and by Bruce Bradley, S.J., in his book “James Joyce’s Schooldays”), yet O’Connell’s photo engages not with “Joyce’s Belvedere” per se: as an alumnus himself, and as a former teacher at the school and the father of a recent graduate, O’Connell has his own claim on Belvedere.

In fact, focusing on a seemingly innocuous detail of the College’s physical space—a wooden sash cord pull and a chain mechanism illuminated by natural light from a round-arched window—his photo registers a spirit of place that not just Joyce but truly anyone who has haunted the hallowed hallways and the classrooms of the College might have experienced and absorbed: a subliminal yet indelible imprinting of Belvedere as physical space.  (Incidentally, other alumni of distinction include the poets and writers Austin Clarke, Denis Devlin, Liam O’Flaherty and Mervyn Wall, historians Tim Pat Coogan and Owen Dudley Edwards, artist Harry Clarke and iconic photographer Fr. Francis Browne, celebrated classical pianist John O’Conor, Abbey Theatre co-founder William Fay, nationalist heroes Kevin Barry, Cathal Brugha, and Joseph Mary Plunkett, businessman and rugby star Tony O’Reilly, and former Taoiseach Garret Fitzgerald.)

What makes this shot so interesting to me is first of all that it represents a variation on what I call O’Connell’s “peripheral vision”—his method of registering with his camera lens essentially what an individual might glimpse, fleetingly and subconsciously, out of the corner of his/her eye.  Set at the edge of a dark background but also centered in the left half of the photo, that lathe-turned cord pull becomes the memorable focal point of the overall image: it enters the viewer’s consciousness just as subtly yet also just as certainly as it would enter the consciousness of a typical Belvedere schoolboy.  A masterful photograph can guide the viewer’s eye just that way.

But what compounds my interest is, of course, the Joycean element: in an intriguing (yet also coincidental) way, O’Connell’s photographic art shares certain aspects of Joyce’s narrative technique of “stream of consciousness”—“interior monologue” without authorial filtering—that he employs at times in “Ulysses.”  Add to this the fact that Belvedere College is the setting for most of Chapters II, III, and IV of “A Portrait of the Artist as a Young Man” . . . and that in Chapter IV Joyce has the eye of his character Stephen Dedalus drawn to a different sort of window cord during his consequential interview with the director of vocations at Belvedere: “The director stood in the embrasure of the window, his back to the light, leaning an elbow on the brown crossblind, and, as he spoke and smiled, slowly dangling and looping the cord of the other blind, Stephen stood before him, following for a moment with his eyes the waning of the long summer daylight above the roofs or the slow deft movements of the priestly fingers.  The priest’s face was in total shadow, but the waning daylight from behind him touched the deeply grooved temples and the curves of the skull.” Obviously, my reading of that photo through a Joycean lens takes very literally Walker Evans’s notion of photography as “literature.”

The other photo that caught my eye has its own story to tell.  Titled on the back “My Parents’ Bedroom,” it is a simple domestic interior—spartan, really—comprising three basic elements: the headboard of a bed, two splashes of sunlight thrown on the wall through an awning-style window (note the shadows cast by its levers), and a crucifix.  As with the Belvedere photograph, the art of this one is determined by O’Connell’s utilization of what photographers call “available light” to direct the viewer’s eye within the frame of the photo: already made conspicuous by being located off-center in the shot, the crucifix is made even more eye-catching by being half-shadowed, in effect bisected by the streaming sunlight.  As the ultimate focus of the entire image, it is also the crux (as it were) of the “story”—the “literary” dimension—implicit in the photo.

And that story involves that most intimate space—the bedroom—of O’Connell’s parents.  Ernest Hemingway has famously described one of his writing practices in terms that seem to apply here: “If it is any use to know it, I always try to write on the principle of the iceberg. There is seven-eighths of it underwater for every part that shows. Anything you know you can eliminate and it only strengthens your iceberg. It is the part that doesn’t show.”  A symbolic expression of private religious belief, the crucifix in the photo is, in literary lingo, a synecdoche—a part of the photographer’s parents’ shared intimacy that represents the whole of that intimacy.  Another iconic American photographer, Diane Arbus, once remarked: “A photograph is a secret about a secret.  The more it tells you the less you know.” As in a Hemingway narrative, much is left to the viewer’s inference or intuition.

Thomas O’Grady recently retired after 35 years as Director of Irish Studies at the University of Massachusetts Boston.