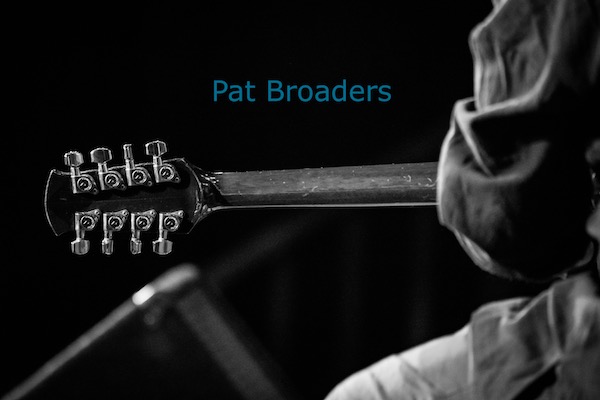 Pat Broaders, “Pat Broaders” • Until this year, Broaders would surely have been at or near the top of any “It’s Really Time He/She Made a Solo Album” list. The Dublin native and now ensconced Chicagoan has long been acclaimed as a first-rate singer of traditional and modern material who doesn’t push or dramatize a song more than is necessary and relies on a clear, steady delivery that can convey drama, humor, tension, sadness, and other salient emotions without excess. He’s also one of the finer bouzouki players around, whether accompanying himself or others – something he’s done in great measure, especially as a member of two trios, bohola and, more recently, Open the Door for Three (with Maine-based spouses Liz Knowles and Kieran O’Hare).

In this case, result easily meets, even exceeds, expectation: The album captures all of Broaders’s talents, including some that have been heretofore overlooked or less in evidence. Its overall feel is quiet, even understated, yet with a strength and purposefulness that takes hold of you. Broaders demonstrates respect and gratitude to singers and musicians who have influenced him over the years – most of all his father, who, like his mother, was from Wexford.

In fact, the first two songs – both learned from his father – put his familial heritage front and center: Patrick Joseph McCall’s “Kelly, the Boy From Killane” and the broadside ballad “The Croppy Boy,” both of which recall the 1798 uprising, one of the seminal events in Wexford history. Broaders is able to unpack the forcefulness of pride, resolve, tragedy, and sorrow in the narrative of both songs without histrionics. In doing so, he points the way to a 21st-century, post-Troubles setting for the Irish rebel song tradition – affirming the historical and cultural importance while de-emphasizing the martial aspect.

A trio of venerable “classic” ballads show Broaders’ appreciation for major figures in the Irish/UK folk revival circa 1970 onwards. “Farewell, Lovely Nancy” – a dialogue between a departing sailor and his lover – is taken from a version recorded by Mick Hanly, marked by its soaring, heart-wrenching melody; Broaders’s bouzouki is in particularly fine form here, almost harpsichord-like in tone. “Reynardine” has a supernatural tint to it – the titular character is a werefox who entices women to his castle – that some variants (such as Fairport Convention’s) accentuate with a slow, minor-key atmosphere of menace; Broaders opts for a version taken from June Tabor that is more playful, emphasizing the romance and mystery in the story (maybe Reynardine’s really a nice guy under all that fur and attitude). “Van Diemen’s Land” is a cautionary tale of poachers deported to the other side of the world – what today is Tasmania – and Broaders’s blending of versions by Christy Moore and Mike Waterson chronicles the painful transition, topped with an anthemic chorus (“Young men all, beware/Lest you be drawn into a snare”).

Broaders is equally adept with contemporary songs, as evidenced by his soulful take on Ewan MacColl’s bittersweet “Schooldays Over.” The other two on this album share a theme: the personalization of war (in this case World War II) through the loss of a sibling, and the imprint this leaves. In Huw Williams’ “Rosemary’s Sister,” the death (during the Blitz) is up close and immediate, and the trauma never really goes away – a helpful reminder that, for all the heroism and mythologizing that accompanied it, the Blitz cost more than 40,000 civilian lives. In some contrast, David Francey’s “Where Harry Sat” depicts a simple but heart-felt closure, for a death long ago and far away. Broaders invests both songs with dignified sympathy and sensitivity, and the lovely recurring riff he employs in “Harry” is a master stroke.

If all this wasn’t enough, Broaders displays quite the flair for tune-writing: “The Merrimac Ferry” has a tranquil, almost Turlough O’Carolan-like character, while “The Liz Effect” – written for two fiddle-playing friends, Liz Carroll and his aforementioned bandmate Liz Knowles – is a mighty Balkanesque tour-de-force with multi-tracked bouzouki. Moreover, “Merrimac” is among the tracks on which Broaders plays whistle; he also adds keyboards and uilleann pipes to his luggage, the latter most strikingly on “The Holland Handkerchief,” which Broaders learned from the singing of Frank Harte, an influential figure for many in the Irish folk revival.

Broaders comes up with a perfect ending track for the album, adding his bouzouki to a 1962 recording made of his father singing Wilson Crean’s “My Irish Jaunting Car” in a Co. Wexford pub. “There’s been many voices that have influenced me along the way,” Broaders explains in the intro, “but the first one was my father.” A very touching, personal way to say “Thanks.” [patbroaders.com] 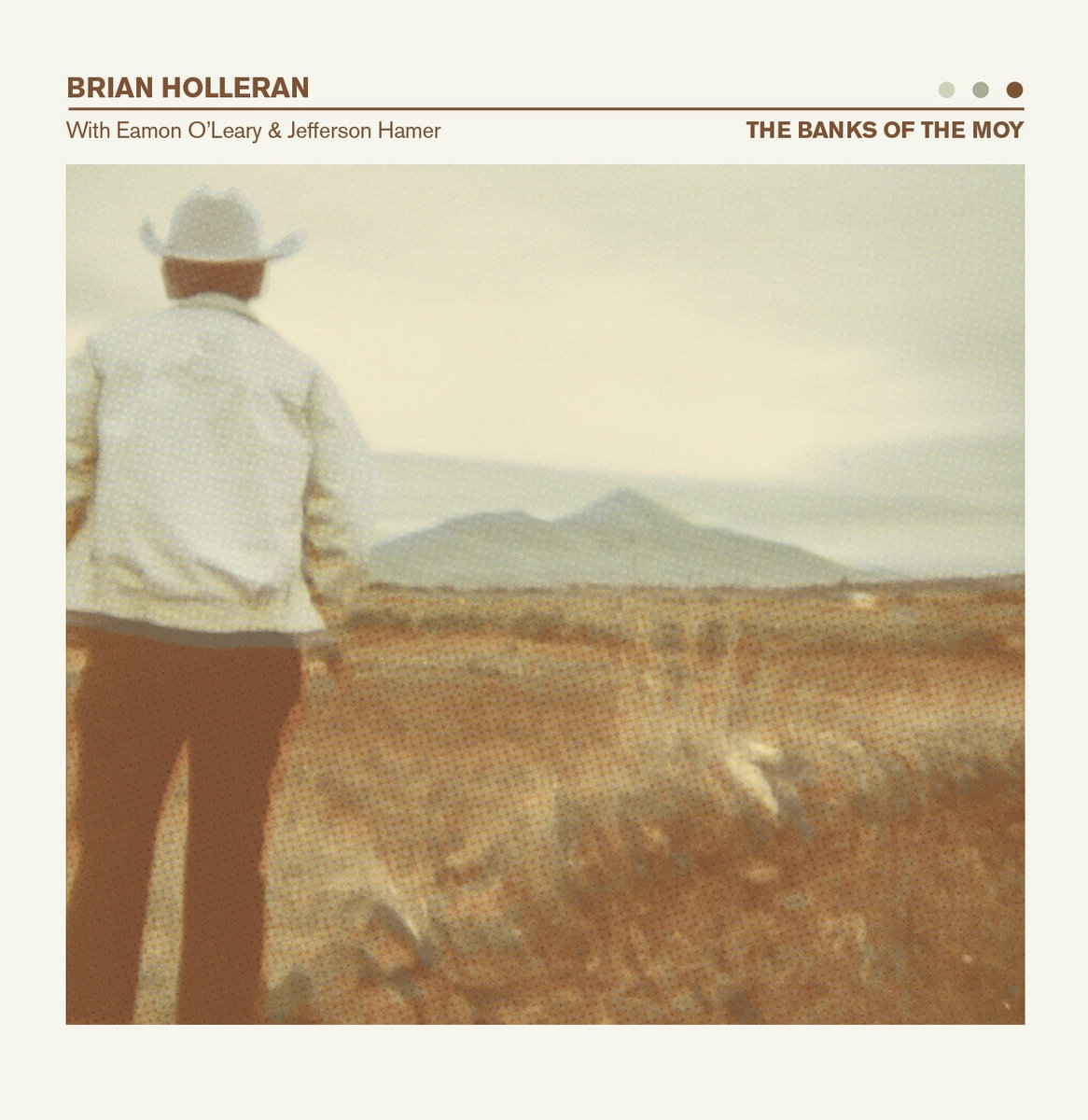 Brian Holleran, “Banks of the Moy” • New Jersey-born and raised in an Irish family, Holleran claims none other than Matt Molloy (specifically the “Music at Matt Molloy’s” album) as his first inspiration, at age 12, for playing Irish music and the Irish flute. Holleran went on to take lessons from another flute legend, Mike Rafferty (a Ballinakill native living in New Jersey), who in addition to schooling Holleran in the instrument also gave him a grounding in the East Galway brand of Irish music and the people who made it a distinctive regional style. You could do far worse.

“Banks of the Moy” is a showcase for the East Galway flute – which has been described as rolling, lyrical, somewhat slower and less ornamented than other styles (perhaps the equivalent of the East Clare fiddle) – and also Holleran’s tribute to Rafferty and other musicians who, directly or indirectly, contributed to his development. Yet the album also is of-the-moment, with an awareness of the artistry that can be achieved in Irish traditional music.

This is due in great part to Holleran’s backers on “Banks,” Jefferson Hamer (mandolin) and Eamon O’Leary (bouzouki), better known as the New York City-based duo The Murphy Beds. They employ this quiet, mesmerizing latticework of an accompaniment style that is fluid as well as rhythmic, not so much using chords but arpeggios and harmonic patterns simultaneously supporting and enriching the melody – O’Leary supplying the lower tones, Hamer in or near the same register as Holleran. But Holleran’s flute is dominant in the mix, so there is no intrusion or confusion as to the elements of each tune.

The album’s two solo tracks provide the most unadulterated portrait of Holleran’s style and approach, in particular “The Banks of the Moy,” a song/slow air he heard from singer and fellow flautist Colm O’Donnell (the song has links to Irish Land League co-organizer Michael Davitt). Holleran’s tone and control – particularly how he bends the note at the end of a phrase – are, to put it mildly, phenomenal. The second solo is a solemn but lithe single jig, “Come In from the Rain,” which he learned through another key influence, Jack Coen of Galway.

Other highlights include a pair of reels, one of them named by Holleran for Mike Rafferty – since that’s who he learned it from – but of uncertain origin (he guesses it’s Finbarr Dwyer, or “even Paddy Fahey”); a medley of invigorating modal jigs, “Peter’s Byrne Fancy/Paddy Fahey’s,” tailor-made for bouzouki and mandolin accompaniment; a splendid three-part version of the set dance “The Ace and Deuce of Pipering,” one perhaps less familiar than that recorded by The Chieftains, Dave Swarbrick, Liam Rowsome, and Téada, among others; and a gorgeous waltz, “The Humours of Glynn,” which may (or may not) have been composed by O’Carolan, and given an Americana flavor by O’Leary and Hamer.

Holleran’s descriptive notes for the tracks, rather than dutiful or utilitarian, are a pleasure in and of themselves and serve to enhance the listening experience. For example, in addition to learning how the set dance “Down the Hill” – given a thoroughly elegant treatment by the musicians – came to Holleran (by way of a recording by Paddy O'Brien, James Kelly, and Daithi Sproule), we read his reminiscence of a hill near his father’s birthplace in Mayo, the legends and folklore associated with the site as well as Holleran’s own childhood impressions of it.

In a similar, if more somber vein is his entry for “Banks of the Moy,” in which he describes the river’s tragic association with his family. At the end, he offers a dedication to “all Hollerans,” whether living or dead, wherever they may be: “We are all still connected and come from the same place.” It’s a sentiment as beautiful as the music he makes. [Available for download at brianholleran.bandcamp.com]