Sean Smith, Special to the BIR

Note: All events are subject to change pending Covid-related developments.

• Seems like their gig has been rescheduled about a dozen times, but finally, finally, the Galway Irish-Americana quartet We Banjo 3 will return to the Boston area this month, playing on May 8 at 7:30 p.m. in Somerville Theater as part of the Global Arts Live series. Marking 10 years since its debut in the US, the band consists of two pairs of brothers, Enda (tenor banjo) and Fergal Scahill (fiddle, bodhran) and David (guitar, lead vocals) and Martin Howley (mandolin, tenor banjo). Widely acknowledged as the originators of “Celtgrass,” a mix of Irish and American folk sounds that are inspired by tradition while embracing pop and other modern styles, the Scahills and Howleys are known for their sheer musical ability, tight playing, and force of personality. In recent years, the band has focused more on its own compositions, which include musings on social issues of the day. Its members have put words into action: WB3 donates a portion of proceeds from merchandise sold on US tours to organizations that provide mental health resources.

Ticket information and reservations are available via globalartslive.org.

•Local duo Rakish comes to the Burren Backroom series on May 4. Maura Shawn Scanlin (fiddle, vocals) and Conor Hearn (guitar, vocals) combine a solid grounding in Irish and American folk traditions with a shared interest in, and love for, chamber music and jazz. Scanlin is a two-time US National Scottish Fiddle Champion and a winner of the Glenfiddich Fiddle Competition, wields the technical range of an accomplished classical violinist, and the deep sensitivity of a traditional musician. Hearn, a native to the Irish music communities of Washington, D.C., and Baltimore, has played for a number of traditional music acts and bands. Rakish, whose appearances include BCMFest, Front Row Boston, and “A Christmas Celtic Sojourn,” released their first full-length album, earlier this year [read an interview with Scanlin and Hearn at bit.ly/rakish-new-CD].

The following night (May 5), House of Hamill returns to the Backroom, this time as a trio. The band formed eight years ago as a duo: Brian Buchanan (fiddle, guitar, mandolin, vocals), a member of popular Canadian Celtic rock band Enter the Haggis, and Rose Baldino (fiddle, vocals), formerly of Burning Bridget Cleary, both well immersed in Irish, Scottish, and Canadian music traditions, but also with influences from folk, rock, pop, and elsewhere. A few years ago, they were joined by Caroline Browning (bass, vocals), and H of H happily continued along its way, performing original as well as traditional material, and covers of songs one might not necessarily expect – say, an all-violin version of “While My Guitar Gently Weeps” or “Bohemian Rhapsody.” Their versatility is in full flower on their recently released album “Folk Hero.” 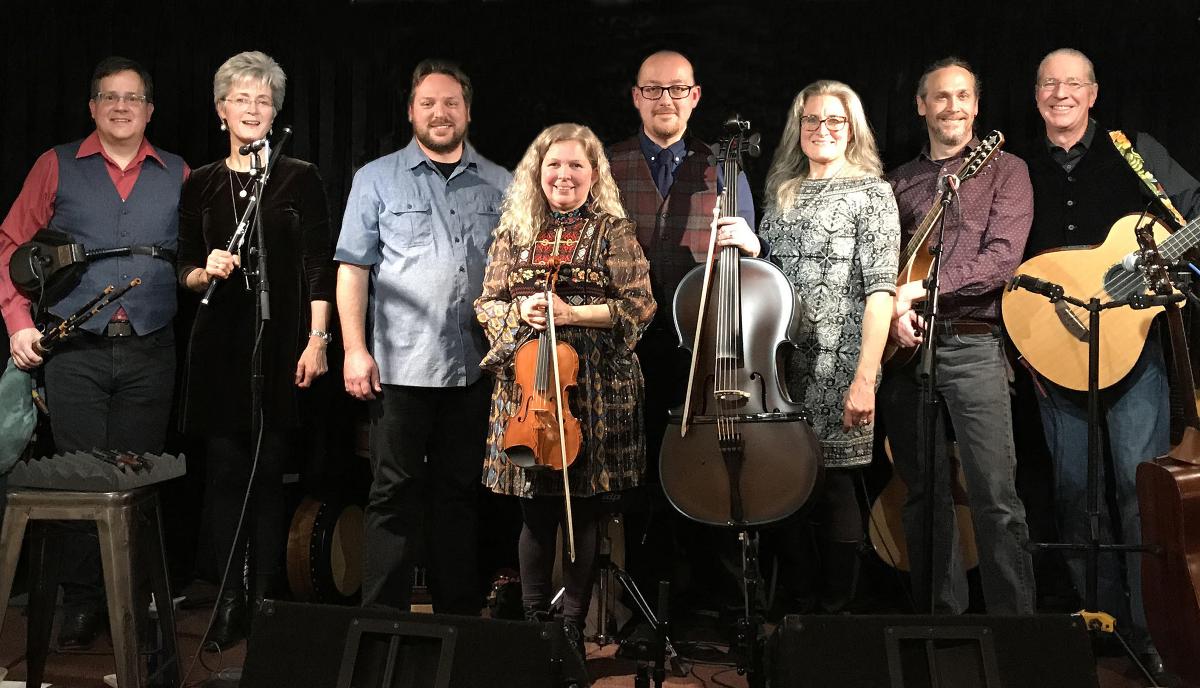 Fellswater will be at the Burren Backroom on May 11.

All the above shows start at 7:30 p.m. More at burren.com/music.html.

•Jenna Moynihan will share insights on fiddling when she leads a masterclass at the Concord Conservatory of Music on May 7 from 5-6 p.m., and then will play a concert at 7 p.m. Moynihan’s style is rooted in both Scottish and Appalachian traditions, and with plenty of room for exploration. She’s been part of a duo with Scottish harpist Màiri Chaimbeul, and their 2017 album “One Two” showcases a connectiveness that is quietly intense yet also joyous and vibrant. In recent years, Moynihan has shown herself to be a fine singer of traditional and contemporary songs, and released the all-vocal EP “Five Songs” in 2021. She’ll be accompanied at this event by guitarist Owen Marshall, a member of the Maine quartet The Press Gang who has been a regular performer in “A Christmas Celtic Sojourn.”

•The Irish Cultural Centre of New England in Canton will host The Byrne Brothers on Sun., May 1 at 3 p.m. A family band from Dublin now based in Florida, the group includes brothers Dempsey (12 years old) on bodhran, whistle ,and vocals, Finn (16) on banjo, mandolin, and guitar, and Luca (18) on accordion – all of whom are dancers – and father Tommy, who plays guitar, fiddle, whistles, uilleann pipes and Highland pipes, and sings. With two albums to their credit, the Byrne Brothers are known for high-energy performances with plenty of showmanship and stage savvy. As befitting a 21st-century act, they also are very active on social media, complete with a YouTube channel that includes “vlogs” as well as concert and session clips and high-quality videos.

Also at the ICC this month is Máiréad Nesbitt, who will give a Mother’s Day performance on May 8 at 2:30 p.m. Most familiar as the kinetic violinist for “Celtic Woman,” Nesbitt has a substantial family background in traditional music (as demonstrated on her 2017 solo album “Devil’s Bit”) and was a former All-Ireland fiddle champion and past member of the National Youth Orchestra of Ireland; she studied at CIT, Cork School of Music under Cornelia Zanidache, and the London Royal Academy. In addition to her folk/trad and classical forays, she has done quite a bit in the contemporary, rock, and world music domain, including guest appearances with Afro Celt Sound System and the Dhol Foundation and the show “Rocktopia.” Nesbitt has also become something of an entrepreneur, creating her own Celtic Violin Collection.

Go to irishculture.org for details.

•Canadian-born fiddler, singer and stepdancer April Verch and her husband/musical partner Cody Walters make a couple of stops in the area later this month: on May 21 at the Rose Garden Coffeehouse in Mansfield (Rosegardenfolk.com) and May 29 at Whale Cove House Concerts in Rockport (whalecoveproductions@gmail.com). Hailing from the Ottawa Valley and its rich Franco-Celtic music traditions, Verch has over the years extended her interests to bluegrass, old-timey, and other folk music, perfectly complemented by the heartland roots of Walters (banjo, guitar, vocals), a Kansas native who first played with Verch as a member of her pick-up band.

•Waltham’s Watch City Steampunk Festival is set to resume this year, on May 7, and among the attractions will be Celtica Nova, who perform at 7 p.m. This multinational sextet is tailor-made for the steampunk vibe, with two Highland bagpipes alongside electric violin, electric guitar and bass, and drums, playing high-octane Celtic rock with a symphonic-metal tint. Don’t expect a lot of subtlety: “Fiery torches on bagpipes and burning drumsticks” also are part of the mix, as their press kit proclaims. Still, as their arch, cinematic videos demonstrate, these folks clearly know how to liven up a festival.

Festival details ­– including a “What is steampunk?” explainer – are available at watchcityfestival.com.