A funeral Mass was held Wednesday, March 4 at St. Brendan’s church for Derek Scott, 54, a native of Turner’s Cross,  Co. Cork. Scott died February 27 in a tragic fire in Oxford, Mass.The State Fire Marshal's office said firefighters had recovered him from a two story garage at 33 Sacarrappa Rd in Oxford MA, a central Massachusetts town some 12 miles southwest of Worcester.

Boston’s Irish Pastoral Centre helped organize the requiem mass and sent out the call for support for his family, particularly his brother Raymond Scott and cousin Mary Kate Scott, who arrived in Boston to bring his remains home to Ireland to be interred. The well-attended service was celebrated by Rev. Dan Finn, and mourners joined the Scott family afterwards at Landmark restaurant in Dorchester's Adams Corner. 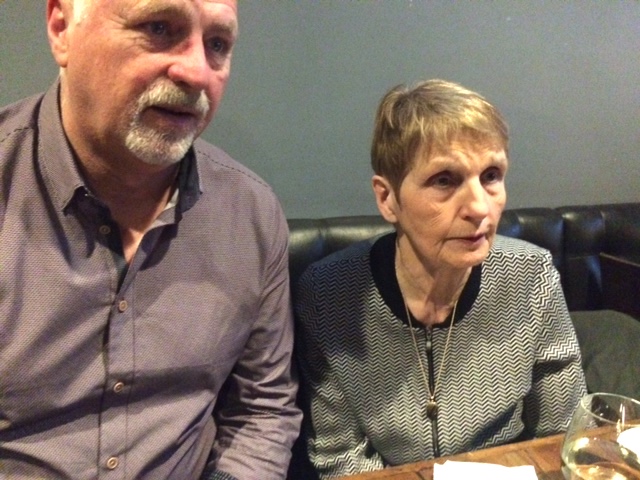 Raymond Scott of Ireland and cousin Mary Kate Scott of Michigan are pictured after the funeral mass.

The repatriation of Mr. Scott back home to Ireland was facilitated by the Kevin Bell Repatriation Trust, whose mission statement reads:  “to alleviate the financial hardship of bereaved families repatriating the body (bodies) of loved one(s) who have died abroad in sudden or tragic circumstances back to Ireland.”

Upon returning to her home in Waterford, Michigan, Mary Kate Scott wrote to thank the Irish Pastoral Center: Her email said:

"I am safely back home now and still amazed at the last 24 hours I was blessed in experiencing with you the results of the wonderful people at the IPC and the entire Boston Irish community. What everyone was able to accomplish was truly a labor of love. The literally hundreds of people that were there to fill St Brendan's church without even knowing him was something I've never witnessed before. Thank you from the bottom of my heart and of course Ray's and the entire family. All of that without even knowing Derek. God bless all of you."

Obituary- In Oxford, formerly of Turners Cross, Cork City, Co. Cork, Ireland, February 27, 2020.  Beloved son of Kathleen (O’Mahoney) & the late James Scott of Ireland.  Dear brother of Raymond and Carolann Scott both of Ireland.  A Funeral Mass will be held in St. Brendan’s Church, 593 Gallivan Blvd., Dorchester, on Wednesday, March 4th at 6:00pm.  Interment St. Michael’s Cemetery, Blackrock, Co. Cork, Ireland.  In lieu of flowers, donations in memory of Derek may be made to The Kevin Bell Repatriation Trust at kevinbellrepatriationtrust.com.

Della Costello, board member of the Irish Pastoral Center contributed to this story.)